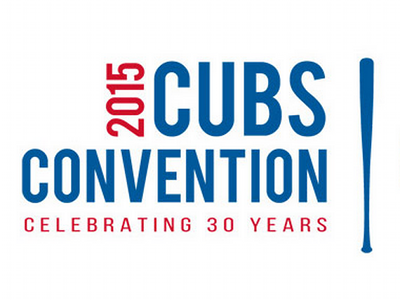 I could be wrong, but I don’t recall the Cubs Convention selling out in recent years – at least not in advance of the event, itself. But, riding a new wave of (justifiable) excitement, Cubs fans sold this year’s out earlier this week. The Convention is next weekend, and even if you can’t attend, there’ll be a ton of stuff here at BN, so maybe you can still feel connected.

Although weekend passes and hotel packages at the Sheraton where the Convention is taking place are sold out, there are some weekend packages available at the West Lakeshore Sheraton (which includes Convention passes).

If you’re coming to the Convention, you can look for me throughout, because I’d love to say hello. I’ll be pretty open on here and on Twitter about where I am/what I’m wearing, so hopefully you can find me in what might be an extra-large sea of people this year. We’ll also get together at Lizzie McNeill’s (a bar next door to the Convention) after the Opening Ceremonies on Friday night. If there’s enough interest, we can get together Saturday night, too. I’ve got energy for miles.

The list of confirmed players, coaches, alumni, team executives and broadcasters includes (and I’d advise against speculating about why guys may or may not be attending (too much we don’t know about travel arrangements and scheduling)):