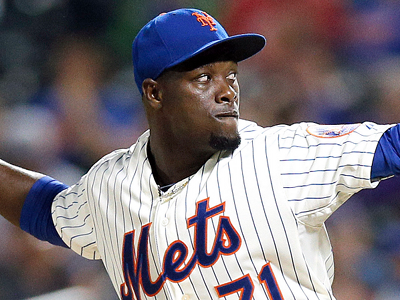 We can finally, and safely, discuss the well-traveled Gonzalez Germen.

If you recall, the Cubs claimed the 27 year-old, righty reliever off of waivers from the Rangers all the way back on January 23. At the time, Brett refrained from really diving into Germen, because there was a flurry of roster moves – including Germen’s own designation for assignment – making it difficult to predict how long Germen would remain with the Cubs. But his continued presence is now a little more certain, so I get to write about him, and you get to read about him.

Germen made his way across four teams this offseason, before finally clearing waivers with the Cubs and being outrighted to AAA Iowa on February 13 to make room for Drake Britton. You know those long, contrived narratives about the galactic improbability of such a unique series of events that combine to contribute to the unlikely existence of a given occurrence? Such is the case of Gonzalez Germen ending up on the Cubs. (Or maybe a few teams just made some low-impact roster moves. I’ll leave it up to you).

*(It’s good to note, as Brett previously mentioned, that it is unusual for a team to have to give up anything, even cash, in a trade for a guy who was DFA’d and waived as part of a roster crunch. Take from that what you will, but it suggests that Gonzalez is (or is expected to be) just a tad better than your usual waiver pick up.)

Each of the four teams above believed that Germen was, at least, an interesting enough player to keep as depth, and some of them even believed he was interesting enough to give up a little extra cash to get him. If you’re wondering why the Cubs were able to successfully keep Germen, while every other team failed to, your most likely answer is that most teams have their rosters relatively set this late into the offseason. Adding, removing, and moving players around, can be especially tricky this time of year with 40-man rosters very full around the league.

All right. Enough transaction discussion. What about the pitcher, himself?

Germen is a 6’2”, 200 lbs righty who was a starter early on in his minor league career, but, like most, ultimately moved to the bullpen as he progressed through the minors. Germen was originally signed by the New York Mets in 2007 as a 20-year-old out of the Dominican Republic. Over six years, he made his way through every stop in the Mets’ system, before making his relatively successful debut as a reliever for the Mets in 2013.

However, due to a combination of his age, time with the Mets, and strong peripherals, Germen earned a call-up on July 12 – where he was promptly met with an extra-innings loss against the Pirates (Yay! Debuts and Meaningless Stats!).

Well, first and foremost, Gonzalez Germen is an interesting, prime-age, right-handed relief pitcher that has shown some success in the past with solid peripherals. At the highest level, for now, he is a solid depth option, should tragedy strike the admittedly loaded 2015 Chicago Cubs bullpen. Germen is in camp as a non-roster invitee.

Whether or not he is an eventual impact piece in the Cubs bullpen is more difficult to project, given that Germen may have a great deal of unharnessed upside. Back in 2014, Baseball America ranked Germen as the 21st prospect in a pitching-loaded Mets system, a lofty mark for a guy who looked like a clear relief prospect at that point. BA also indicated that the combination of above average control and 2 plus pitches – a changeup and a fastball – give Germen a “strong relief profile.”

But the most interesting thing about Germen is the strength of one particular pitch: his changeup. Overall, Germen primarily uses three pitches: a fourseamer, a slider and a changeup. Amazin’ Avenue dives deeper into his repertoire here, along with gifs and analysis.

Unsurprisingly, Germen’s fastball, sitting at 93-94 MPH, is his most used pitch. Most interestingly, though, his changeup actually comes in as one of the nastiest in the game (besides Kyle Hendricks’, of course). Sitting between 84-85 MPH, Germen’s changeup is a good deal slower than his fastball. Because of his ability to mimic his delivery, and the large gap in velocity, vis a vis his fastball, Germen’s 2014 MLB changeup came in with a stellar 32.67% Whiff Rate, according to Brooks Baseball. This wasn’t a new development, either. In March of 2014, Eno Sarris pegged Germen’s 2013 changeup as elite, pointing out the 30.5 swSTR%.

So, again, what’s going to happen to Germen this year? Who knows. Through ineffectiveness or injury, perhaps Germen will find himself in Cubs’ bullpen at some point in 2015. With a solid fastball, decent control and a nasty changeup, there’s legitimate upside there. Best case? Germen works with the Cubs’ pitching infrastructure to refine his command, and to retool his pitch sequence/frequency, to better utilize his changeup. With the weapons that Germen carries in his bag, it’s easy to see why so many teams hoped to keep him and even easier to be delighted the Cubs ended up with him.

If you want to get a look at Germen for yourself, check out a couple videos of him in action: