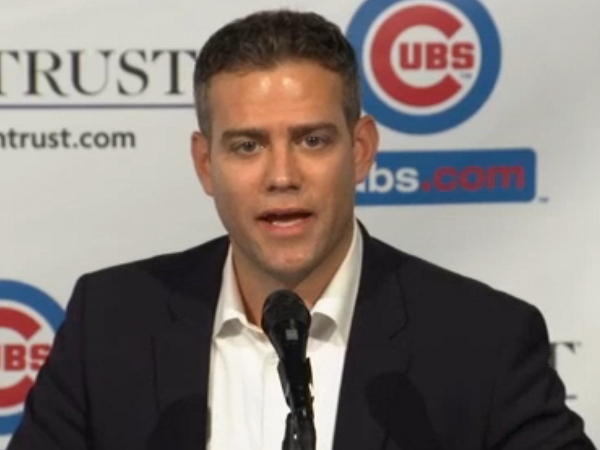 Last week, MLB Players Association Director Tony Clark said that they would be watching the Chicago Cubs’ handling of Kris Bryant this year, in relation to potential service time issues. Given that Bryant is a uniquely talented youngster, and given that the relationship between his projected performance and the service time implications of his call-up have been discussed many times already in the past year, it’s understandable that this was a topic of discussion with Clark.

But it sounds like Chicago Cubs President of Baseball Operations Theo Epstein doesn’t think this should be getting all the attention it’s getting, including from the MLBPA.

“I haven’t talked directly to Tony about it, so I’ll withhold comment,” Epstein told Barry Rozner on The Score this weekend when asked about Clark’s comments. “But I didn’t know we needed Players Association permission to send a player to the minor leagues who’s not even on the 40-man roster and has less than 300 plate appearances at AAA. That’d be a new one to me.”

Framed that way, of course, any suggestion that the MLBPA should be in a position to file a grievance against the Cubs for not bringing Bryant with them on Opening Day sounds pretty ridiculous.

You can read Epstein’s full comments here at CBS, where he suggests this isn’t really a big story, and the decision about Bryant’s readiness for the big leagues will be an entirely baseball-directed decision. He mentions the risks associated with calling a player up too soon, and potentially derailing his development.

Whether that’s a concern with Bryant or not, Epstein’s certainly right that it’s a little silly for the MLBPA to be looking over the Cubs’ shoulder with respect to a prospect who has just one full professional season under his belt, and has fewer than 300 plate appearances at the AAA level. I understand that the MLBPA is simply doing its job, and, as I’ve gone to great lengths to emphasize, I also empathize with baseball players wanting to be in the big leagues, starting their service clock, as soon as possible. I’ve got no beef with anyone in this situation.

From the Cubs’ perspective, they have to balance (1) winning at the big league level in 2015, (2) maximizing Bryant’s development so that he is, long-term, the best possible player he can be, and (3) maximizing team control over a special player. That third one is obviously the sticky wicket, but we can’t pretend like it doesn’t exist. Still, the message from the Cubs will remain the same: promotion/demotion decisions are made for baseball reasons.

It remains highly likely that Bryant will begin the year at AAA Iowa, where he will work on defense, a small hole or two in his swing, and the Cubs will sort out their roster situation. If Bryant performs as expected, he’ll be up with the Cubs in due time, likely in late April or early May. At that point, any saber rattling on this service time stuff will likely fall away.