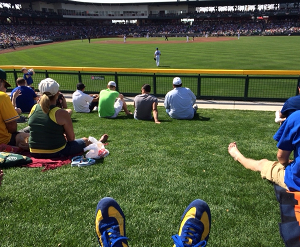 The Cubs’ new lefty ace and pricey offseason investment makes his debut in a Cubs uniform, hopefully throwing two completely boring, uneventful innings against the Reds today. Although Joe Maddon hasn’t yet committed to David Ross as Lester’s personal catcher for the season, Ross does get the assignment today.

But Welington Castillo isn’t left out, as he’s pulling DH duty. It’s only been two games, but showcasing Castillo early in the Spring – at least to show he’s healthy and functioning normally – to other teams’ scouts who are undoubtedly in attendance seems like a wise move.

Today’s game is not available via video (unless there’s an unexpected surprise like there was yesterday at the Giants’ website), but you should be able to listen to the audio on Cubs.com. If you have an MLB.com account, log into it, and then try to listen on Cubs.com – I’m told these broadcasts are supposed to be free to listen to that way.

Carrie Muskat says Kyle Schwarber is backing up Ross behind the plate today, so he may get in some catching action.

Interesting that Olt is starting, but at first base rather than third, which is occupied by Valaika. Just want to get Olt extra work at first base, since his skills at third aren’t in question? Giving his arm a rest, since he’s had shoulder issues in previous springs?

Lots of other guys moving around, which I love to see, especially in Spring.