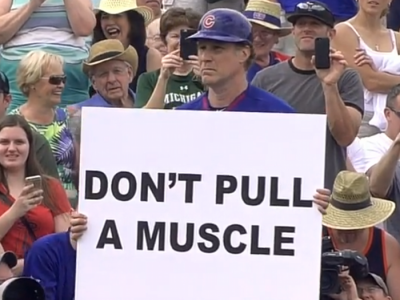 There were so many fun things that I wanted to point out about today’s game that I knew it would overwhelm the Miscellany if I tried to pop it in there. So this is just a pile of fun things if you missed any of it.

Kris Bryant is a beast, and he went deep twice on the day:

Jorge Soler is similarly beastly, and he swung out of his shoes on this one:

Soler also started a fun play with a looper down the line, during which he hustled to second (nifty slide), and Javier Baez hustled home (nifty slide):

On a day of fun things, that may have been my favorite play. I also don’t want to leave Addison Russell out, because he was 3-3 with this shot:

Sure, it was “only” a double, but he sent that thing 410 feet from the tops of his shoes. Russell has some serious power, too.

And, of course, there was the Will Ferrell-related fun, including his at bat:

Joe Maddon sent Will Ferrell to the plate, and the Angels promptly shifted. A lot. Ferrell struck out. pic.twitter.com/IDIbyh5LZp

Will Ferrell pulled from the field after one batter. Not happy about it. pic.twitter.com/J7A3T8dFMg

Cubs 3B coach Will Ferrell with an appropriate sign for Jorge Soler, who promptly homers. pic.twitter.com/xi39nwibLU

Coach Ferrell, it seems, does not want to see Welington Castillo traded. pic.twitter.com/J4EL2zVfew

The signs, of course, led to meme’ing, as these kinds of things do: