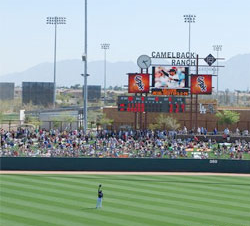 The Cubs head to Camelback Ranch to take on the White Sox for the first time this year. Remember when these used to be the only games the teams would play in a given season? There was a sense of rivalry, even within a Spring game. Now? Eh. Not that I’m complaining. I like the games in-season.

Travis Wood starts for the Cubs as heads down the homestretch of locking up a rotation job. The game is once again on CSN, or, if you don’t have CSN, you can watch on MLB.tv.

La Stella and Alcantara switch at second and third, and I remain fairly well convinced that the Cubs are trying to get the best sense possible of their relative defensive abilities at those two positions (whether they’ll wind up starting there or not).