No Surprise: Anthony Rizzo is Extremely Important to the 2015 Chicago Cubs Skip to content 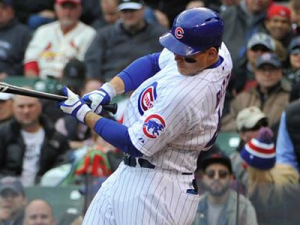 With the Cubs right on the cusp of competitiveness in 2015, an injury to an expected key contributor would be especially devastating to their playoff chances. However, injuries to players around the diamond have unique and independent levels of severity. To measure how severe a given player’s injury would be, you must subtract their expected performance from that of their replacement. It’s important to subtract the production of your starter from your replacement, because losing your star to injury may actually be more bearable than losing your second or third best player, depending on who replaces them in the lineup.

Eno Sarris explored this very topic league-wide over at JABO, trying to determine which players in baseball would be the hardest to replace. Using projected WAR and pro-rating stats across 600 plate appearances, Sarris came up with a list of the top 10 least replaceable – by their current team’s roster – position players in baseball.

The list itself is categorized by amount of wins their team would lose if the backup started the entire season. You can see more on each individual case, by checking out the very interesting, if not nerve-wracking read, here. In short, the six players who could make their teams five wins or more worse off if they were to be injured for the whole season are Mike Trout (duh), Joey Votto, Troy Tulowitzki, Giancarlo Stanton, Yadier Molina, and Robinson Cano. No real surprises there.

But lurking in the next tier: Anthony Rizzo.

You’d rarely expect a first basemen to be the least replaceable player on your team, but thanks to his expected performance and lack of an ideal replacement, Rizzo makes the cut. For the Cubs, regardless of his position, losing Rizzo’s bat would be a serious blow. And he’d be very tough to replace.

Before identifying Rizzo’s replacement, Sarris concedes that “mega-prospect” Kris Bryant could fill in for an injured Anthony Rizzo, which would remove Rizzo’s name from the list. To me, it’s very unlikely that Bryant’s development is interrupted to learn another new position (in addition to the outfield), regardless of the scenario. Further, since Bryant is expected to come up eventually anyway, his bat wouldn’t really be “replacing” anyone who went out with a surprise injury.

Ultimately, Sarris agrees and identifies Mike Olt as the primary backup. Unfortunately, Olt – who keeps popping up in terms of importance and relevance to the 2015 Cubs – may actually be the best, realistic option for first base, should Rizzo go down.

The downside here is that Olt will lose a great deal of value, namely WAR, by moving off of third base – where he is above average defensively. In other words, to effectively replace Rizzo, Olt would need his offense to develop even further than it would need to in order to be a productive regular at third base – which is already a lofty expectation.

So, who else could/would fill in for Anthony Rizzo, if the unthinkable happened? After Olt, the options get increasingly limited.

Consider two of the other players seeing time at first base this Spring: Chris Valaika and Mike Baxter.

Chris Valaika, is a decent depth utility option, but as a regular first baseman, there’s a lot to be desired – in his chance at the big league level last year, Valaika hit just .228/.273/.332 in over 130 plate appearances. Worse, he projects to have a negative WAR over a full season, which would actually move Rizzo up the list – i.e. the wrong direction.

The Cubs signed lefty Mike Baxter to a minor league contract back in January, who could be an option. Baxter did have some success with the Mets in 2012, hitting .263/.365/.413 in over 200 PAs, but that was supported by an increased BABIP, which was unsustainable. After some expected regression, Baxter came back down to Earth and hit under .200 over the last two seasons. So he’s not a particularly exciting option either.

We could stretch and say that the Cubs could maybe use a guy like Welington Castillo (if he’s still around) at first base, or maybe Ryan Sweeney or Tommy La Stella. But it becomes a whole lot of almost random guesswork at that point.

Ultimately, I think this list probably a touch overly fear-inducing. Most team’s reserves aren’t nearly as good as their starters, unless the starters aren’t too good themselves. Furthermore, it’s pretty intuitive to guess that the best players in baseball will be the hardest to replace. Hopefully, Rizzo and the rest of the Cubs starters will remain as healthy as possible throughout the year, and we never have to worry about who will (let alone can) replace them.

[Editor’s note: forgive the plug, but if you enjoyed this read about Anthony Rizzo, perhaps you’re going to want to win a signed Rizzo bat …. ]
Filed to: Chicago Cubs
Latest from Bleacher Nation: