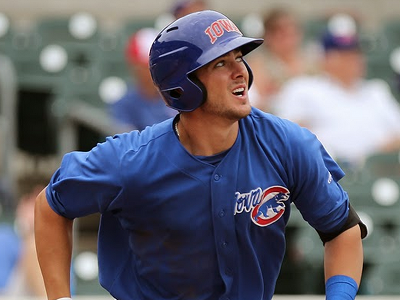 Last week, Kris Bryant’s agent, Scott Boras, went on full blast about the Chicago Cubs potentially not starting the season with Bryant on the big league roster. Bryant, who was impressively mature about the whole thing, is killing it in the Spring, has killed it as a professional, and is going to be a big league mainstay very soon. But, if the Cubs wait to call him up until just a couple weeks into the season (or more), they will get an entire extra year of team control before he reaches free agency.

And, even setting that aside, there are baseball considerations that will guide the Bryant promotion decision (which Theo Epstein has said will be a baseball decision): Bryant has very limited professional experience, Bryant has never played early-season professional ball in the cold Midwest, Bryant has been working on his third base defense, Bryant missed a week of defensive reps in games with shoulder fatigue, Bryant may work at other positions, Bryant had an elevated strikeout rate last year, Spring Training stats can be extremely misleading, the Cubs have a full 40-man roster and difficult decisions to make for the start of the season, and a catch-all about whatever is best for Bryant’s long-term development.

None of that is to say that Bryant won’t be a stud in the big leagues, and, indeed, couldn’t be a stud on April 5. Instead, it’s simply to point out that there are plausible baseball reasons for a promotion strategy that doesn’t include Bryant on the Cubs on April 5.

This could all be very important if the talk of a grievance against the Cubs for artificially holding Bryant down continues to pick up. There was Peter Gammons talking about what Scott Boras might do this weekend, and now there’s a full article from Ken Rosenthal where he affirmatively argues that the MLBPA should file a grievance against the Cubs if they don’t bring up Bryant for Opening Day. Rosenthal isn’t quite arguing that the Cubs would be wrong for holding Bryant down – just that a union should fight for a player like Bryant (setting aside the fact that Bryant, not on the 40-man, is not yet a member of that union, and would be taking the job of a union member when he’s promoted – that’s a “technically” and “just sayin'” kind of thing).

In the end, maybe there will be a fight. As I’ve said, Bryant’s situation certainly makes for the most compelling case against the current service time rules that we might see before the current CBA is up after 2016. But that’s the problem: this is all within the collectively-bargained rules. The Cubs, if they send Bryant down, are doing nothing wrong. Furthermore, it’s almost impossible to see an arbitrator substituting his own baseball judgment if the Cubs say they think it’s for the best of the player and the organization if he heads to AAA Iowa for a little while. What kind of a nightmarishly awful precedent would that set?

I’m like everyone else who loves the Cubs and/or baseball: I want to see Bryant playing at Wrigley Field for the Cubs. But, on a personal level, I’m perfectly comfortable waiting for a little while if it guarantees that the Cubs have Bryant for an additional year in his prime. And, on a baseball level, I think it gets really sticky when you try to make a formal, final, official judgment that there were absolutely no baseball reasons whatsoever for letting a player have more than 300 plate appearances at AAA before debuting him in the big leagues.

(Obligatory: everything you need to know about Kris Bryant and service time considerations.)

Meanwhile, and not entirely unrelatedly, the Cubs will soon give Bryant the opportunity to work in the outfield, as they’d mentioned earlier in the offseason.

The expectation is that Bryant will start working in the outfield tomorrow, and could see game action there before the end of the Spring, depending on how things go. (Cubs.com) Joe Maddon concedes that, all things equal, it’s harder to find a good third baseman than a good corner outfielder, so the preference would be for someone like Bryant to excel at third base (CSN). But everyone agrees that versatility, even for a potential star like Bryant, is a good thing. Maybe we find out that Bryant is an elite defender in left a la Alex Gordon, while he could have been average or worse at third base. And maybe Mike Olt finally breaks out with the bat, and everyone agrees that the best formulation is to have Bryant in left field (the Chrises Coghlan and Denforia would then become bench players, absent an outfield injury) and Olt at third. Or maybe Arismendy Alcantara or Tommy La Stella blows up and you want to make sure he’s got a regular spot in the infield. Or maybe something else happens that makes you wish you knew whether Bryant could be a decent defensive outfielder. It’s just good to figure this stuff out, at least a little bit, in the safe confines of Spring Training.

Everyone seems to believe Bryant can handle the outfield with ease – he certainly has the athleticism and arm. It sounds like Bryant is into the challenge (not that you’d expect anything less from him), and I look forward to seeing how he looks out there. My guess is that, like Maddon, the front office still prefers that Bryant land at third base, at least for a little while. But, if he doesn’t, and even if Olt is not succeeding there, Bryant in the outfield could provide a little clarity to the underdiscussed question of where Addison Russell is going to play if he’s ready by midseason and the Cubs want him up for the stretch run.