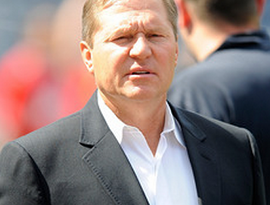 Not that you’d expect anything different, but super agent Scott Boras is continuing to tour in support of his client, Kris Bryant, and the hope that the young stud prospect will make the Chicago Cubs’ Opening Day lineup. With every Spring homer Bryant hits, the national conversation about Bryant, the Cubs, and the two-word monster that is “service time” grows louder and more visible.

Boras’s latest stop was on the Dan Patrick Show, and the Bryant situation was clearly the focus of the visit (which tells you all you need to know about how huge this story is, given that Boras is the biggest agent in baseball). Boras argues that Bryant has earned the right to show what he can do at the big league level, and it preserves the integrity of the game to have guys like Bryant in the big leagues when they’re ready.

You can watch the entire Boras interview right here:

Boras concedes that no one from outside the organization should be telling the Cubs who to play, but his argument is that there’s no real baseball reason not to play Bryant. Boras points to unnamed players who have less experience at AAA and poorer performance at AAA who are going to make the team.

It’s clear that this conversation isn’t going to go away until camp actually breaks, until Bryant is eventually called up, and then until the contractual implications play out. So … pretty much never.

In the meantime, Bryant could play the outfield soon, and there could eventually be a grievance filed on Bryant’s behalf if he’s not brought up on Opening Day. If Bryant is at AAA Iowa for 12 days (9 Cubs games) to begin the 2015 season, the Cubs will retain an extra year of control on Bryant, and the tradeoff there is likely too difficult to pass up. Couple that with some potentially legitimate reasons for starting Bryant at Iowa in April – defensive considerations, Cubs roster management considerations, swing adjustment(?) considerations, weather adjustment considerations, etc. – and it’s hard to see this going any other way right now.

As for Boras’s and Bryant’s role in the broader conversation, I’m still of the mind that this is simply a prime opportunity for Boras to attack a system that, in fairness, he’s griped about for a very long time. Obviously I don’t like that the Cubs and Bryant are at the center of a nuanced discussion that many folks aren’t treating with the level of care necessary, but I certainly do understand that this is an important issue that goes far beyond the Cubs.

The problem, of course, is that there has to be a cutoff for free agency. And as long as there’s a cutoff based on service time, and as long as teams are entitled to make their own promotion/demotion baseball decisions, you’re going to have the potential for shenanigans. I’m not saying that’s what the Cubs are doing here – or that they’re “wrong” if they are (I don’t think they would be “wrong” for sending Bryant down to begin the year, for what it’s worth). I’m just saying it’s a systemic issue, and Cubs/Bryant/Boras are just the focal point right now.