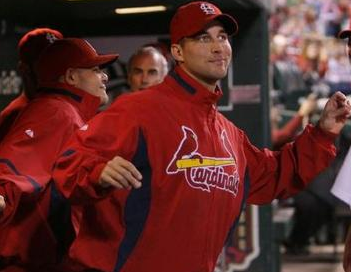 After throwing 6 2/3 innings against the Miami Marlins in the Grapefruit League today, Adam Wainwright was announced as the Opening Night starter for the Cardinals against the Chicago Cubs this Sunday. If you recall, Wainwright suffered an abdominal strain just before Spring Training began, and his ability to start opening night was called into question.

Today marked Wainwright’s third start of the spring, and it was a pretty good one – 93 pitches, 8 H, 1 ER, 1 BB, and 2 K over 6.2 innings. Hopefully, Wainwright will square off against his ace counterpart in Chicago, Jon Lester, who has had issues of his own – dead arm – this spring. Tentatively, after throwing 84 pitches in a minor-league game today, Lester appears to be ready for an exciting Opening Night (I’ll be there!).

Though it’s good news for Wainwright and the Cardinals, he has had several injury issues over the past couple years of which to be mindful. In addition to the abdominal strain that kept him out early this Spring, Wainwright reportedly had some discomfort in his elbow that limited his durability through a couple of September starts (you know, the month he won NL Pitcher of the Month). Despite the success, there were concerns over Wainwright’s elbow in October, and he ultimately had a minor elbow surgery to remove the cartilage that was apparently causing the discomfort.

Despite having Tommy John surgery in 2011, Wainwright has thrown more innings (519 2/3) than any other pitcher in baseball over the past two years, and it doesn’t quite look like anything will change in 2015 – at least as far as the projection systems are concerned. Steamer projects Wainwright to carry a 3.33 ERA (3.32 FIP) over 195 innings, ZiPS projects a 2.92 ERA (2.95 FIP) over 204 innings, and PECOTA has Wainwright with an equally infuriating 2.91 ERA over 194 innings. Worse, he looks to anchor a Cardinals pitching staff that should be one of the top three in baseball – yes, even better than the Cubs look at #7.

Needless to say, Wainwright is an effective, dominating pitcher, and has been for quite some time. Ultimately, I’m happy that the Cardinals are at full strength for Sunday’s Opening Night game. It’ll be all the sweeter, taking one from a Cardinals team without any excuses, in front of the entire country. After all, the rivalry’s back on, haven’t you heard?