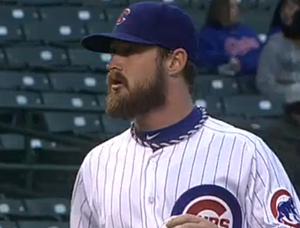 Chicago Cubs manager Joe Maddon just met with the media, and it looks like he was very forthcoming.

First, the rotation and bullpen are set:

No surprises there, as Wood inspires just a little more confidence in the rotation (and provides more offensive/defensive value) than Jackson. With Wood in the rotation (kind of wish he was going third at home, rather than at Coors Field, what with his fly ball tendencies, but whateves) and Drake Britton sent to Iowa, that leaves Jackson as the final arm in the seven-man pen: Jackson, Hector Rondon, Pedro Strop, Neil Ramirez, Jason Motte, Justin Grimm, and Phil Coke.

As for who will be catching the pitchers:

Maddon added that Lester (who returned to Chicago) won't have a personal catcher. Ross still seems destined to start Sunday.

So, there’s a chance we may see more of a L/R platoon situation. But, as Gonzales indicates, it just feels like David Ross will be catching Lester in that first start. From there, maybe they start platooning, but sometimes pitchers get comfortable with certain catchers. We’ll see.

As for the positional portion of the roster:

#Cubs Denorfia still testing hamstring but will likely be on DL

No word on final roster spots between Szczur, Sweeney and Herrera. 2 for 3. Tomorrow or even Sunday on that one

The only reason to wait at this point is because of the potential for external roster shuffling. Players are going on and off of waivers right now behind the scenes, so that could be part of the impact, or the Cubs could be seeing what’s out there for Sweeney. If so, that would suggest, absent a trade, that he’s got the inside track on a roster spot. There’s also still the slim possibility that Welington Castillo is dealt, which would put all three of those guys on the roster.