Welcome to the 2015 Chicago Cubs Season - Thanks for the Cookies, Bring on the Meal Skip to content 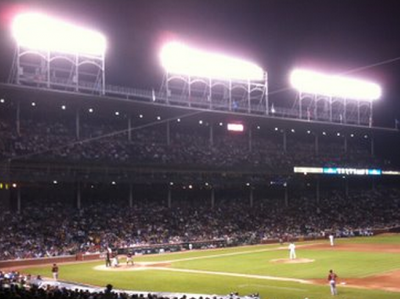 Chicago Cubs fans have been looking forward to this day since about July 9, 2014.

That’s the day Arismendy Alcantara was called up last year, and fans got their first taste of the wave of COOKIES coming through the system. Alcantara was followed by Kyle Hendricks, Javier Baez, and Jorge Soler. Each saw some success, some failure. But, by the end of September, it was incredibly easy to be excited about the future. A future that started to feel a whole lot less amorphous.

Sure, Baez isn’t on the team right now, and sure, Wrigley Field is distractingly under construction. But, for the most part, tonight will be everything Cubs fans hoped it would be, and more – because it comes with Jon Lester on the mound, Dexter Fowler in the outfield, a yet-to-be-named new catcher behind the plate, and Joe Maddon in the dugout.

The “future,” it turns out, isn’t just about the youth coming through the system (though there’s still plenty more coming). It’s also about an organizational commitment to bringing in players externally to move the ball forward.

The reward for that patience begins tonight. To paraphrase Theo Epstein’s now famous cookies analogy: The table has been set. Bring on the meal.

But the best part of today? For the first time in years, it really, really feels like today matters.