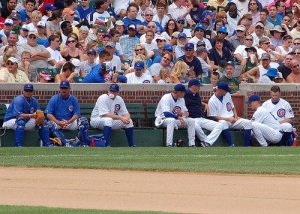 Opening night against the Cardinals has come and gone, and the Cubs came out on the losing end. Undoubtedly, the Cubs had some poor BAPIP and sequencing luck last night (on both on offense and defense) – plus an erratic strike zone – but they didn’t play that all that well, either. Jon Lester didn’t make it out of the 5th inning, while the rest of the Cubs struck out 12 times, had two errors, and went 0-13 with runners in scoring position.

It wasn’t all doom and gloom, though.

Because Lester was out of the game so early, we got to have a nice, long look at one of the bright spots from the second half of 2014: the bullpen. Last night, the bullpen collectively pitched 4.2 shutout innings, giving up just two hits, one walk and recording five strikeouts. We often take the bullpen for granted, and forget to recognize the strength that it can be for the Cubs in 2015. So, let’s take a look at who is in the bullpen, identify potential roles and then determine some overall strengths and weaknesses.

Continuing his duties from last season, Hector Rondon looks to build upon the success of a 2014 campaign that saw him save 29 games, while maintaining an impressive 2.42 ERA and an even more impressive 2.26 FIP.

The Cubs signed Phil Coke this offseason to a deal that can net him up to $3 million, depending on some incentives tied to appearances. Coke figures to be the primary lefty specialist out of the pen so long as he’s healthy, as he’s faired pretty well against lefties for his career – 3.01 FIP, 23.5% K-rate, 6.6% B-rate.

We know the story for Edwin Jackson, so I won’t repeat too much here. Jackson has struggled mightily over the last two years and is owed over $22 million over the next two years. Hopefully, he can be an effective long man on days where the starters don’t make it too deep into their games. There’s reason to hope his stuff can play up in the pen (increased velocity, limited passes through a lineup), but he’ll have to prove that, first.

While a few spots in the bullpen are well-defined, it’s very likely that the rest of the Cubs bullpen will find themselves in many different “roles,” throughout the season. Cubs manager Joe Maddon has said several times that he prefers not to pigeonhole his relievers into specific roles because it artificially limits how and when you use them. So, in general, these four flamethrowers will most likely be used in high-leverage, late inning situations, determined mostly by effective match-ups and usage.

Coming in at 11th overall on the Depth Charts, FanGraphs projects nice seasons for most of the Cubs bullpen – with the exceptions being Coke and Jackson – but what specific strengths and weaknesses, should we expect?

One particularly interesting strength for the 2015 Cubs bullpen is the age distribution. Looking up at the list above, we see that the Cubs have a good core of four young/prime-age pitchers in Ramirez (25), Grimm (26), Rondon (27) and Strop (29). We know that relief pitchers are notoriously fickle, year-to-year, so having as many prime aged guys as you can is a good way of hedging against that. Similarly, the Cubs have three other pitchers with a fair amount of experience in Motte, Jackson and Coke – we know that experience matters, whether we can quantify it or not. These three have been around the league for a long time, they know the hitters, they know the parks and they know the game – that is an asset.

Additionally, the Cubs’ front office clearly has a thing for hard-throwing relief pitchers (most do). Every pitcher currently in the Cubs bullpen can throw a fastball greater than 94 MPH. Jackson and Coke averaged just less than 94 MPH in 2014, but both also hit 97 MPH that same year. Velocity isn’t the sole determinant of effectiveness – we know that – but there is definitely some correlation, and Hoyer and Epstein have clearly targeted players with a hard throwing profile.

Despite the many positives, there are always negatives. The 2014 bullpen was very, very good; however, most of that success came off of career performances from many young, inexperienced arms. Strop only made his full time MLB reliever debut in 2012, Rondon in 2013, and Ramirez and Grimm in 2014. These four pitchers have shared some success, but we have to remember that they do not have a very long track record just yet.

Additionally, Jason Motte and Edwin Jackson are pretty unique cases. Motte pitched 25 very ineffective innings in relief for the Cardinals last year, after getting Tommy John surgery and missing all of 2013. And again, Edwin Jackson is Edwin Jackson. He should be starting, but he just hasn’t been good enough to allow 200 innings to be decided by his (lack of) effectiveness.

Of course, every bullpen has their own strengths and weaknesses. On the balance, the Cubs bullpen should be very good in 2015. The Cubs have been derailed pretty badly by some early season bullpens over the past several years, but I don’t think we’ll see that this year. With any luck (or at least the lack of bad luck), the bullpen can be a very real strength for the Cubs, and help smooth out the ups and downs in overall performance that will come with a young, unpredictable offense. If you want an example of how important a strong bullpen can be, look no further than the 2014 Kansas City Royals – they made it pretty far.