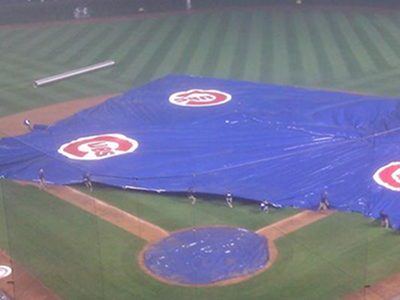 The Chicago Cubs have announced that they won’t be playing the St. Louis Cardinals tonight at Wrigley Field.

The forecast called for rain and sub-freezing wind chills throughout the evening, so it was going to be exceptionally nasty. The Cubs don’t expect to make the game up this week, but haven’t announced a rescheduled date yet (hang on to your tickets). The Cardinals don’t come back to Wrigley until July, so that’s tentatively where you’d be looking.

Which … well … it’s not the worst thing in the world. Sure, we all wanted to watch the Cubs tonight. It was painful enough to suffer through yesterday without a game to take the stink off of Sunday night’s game, but now we have to wait yet another day. And then there’s another off-day after that. But games in July tend to be better attended (more revenue). And games in July should feature the full bleachers available (more revenue). And games in July might feature Kris Bryant (more sparkle). Since service time goes by days, not games, the postponed game today means one fewer that Bryant will miss before he’s eventually promoted. No, one game of one player doesn’t make a huge difference. But it is fun to note.

We’ll see if the Cubs shuffle the rotation now that they’ll have three off-days in the span of five days. They could push back one of the other starters in favor of keeps Jon Lester on regular rest, or they could opt to give him more rest, and just keep everyone lined up.