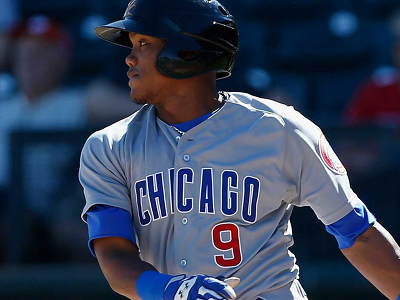 Kris Bryant is exiting the minor leagues. While he will maintain his official prospect eligibility for a time, it is all but certain that we will soon have to cross his name off the top of the Bleacher Nation Top 40 Prospects List. And we’ll have to cross off number two Jorge Soler as well.

And so, Ladies and Gentlemen, may I present to you the new Top Prospect of the Cubs Organization, Addison Russell! If you have not brushed up on this infield prospect while reveling in all the pre-season and early-season excitement around Bryant and Soler, now is the time to get on the latest prospect bandwagon.

(Apologies, by the way, to jack-of-all-trades Cubs prospect Anthony Giansanti:

Russell is a disciplined hitter who has a chance to hit for a good average, with better than average power, and he shouldn’t be prone to elevated strikeout totals. Defensively, he can do it. He has the arm strength for short or third, but a slight oddity in his throwing motion may make him a better fit at third or second. Or first. Or the outfield. Or… Ok, just write all the numbers from three through nine on a sheet of paper, close your eyes and stab at one. You hit a position Russell can play (with the possible exception of center field, but that is only a possible exception).

As for when he will be ready… now-ish? From what I saw in Tennessee last season and on video so far this spring, Russell needs less polish time in Triple A than any prospect to come through the Cubs organization since I started doing this. Pre-season I had him projected for mid-August at the latest, but a promotion in early May would not surprise me one bit. When the Cubs need him, he’ll be ready.

Nor do I think they’ll specifically wait for the Super Two date in June to pass first. I doubt they rush Russell just to get him on the infield (which already features Starlin Castro, now Kris Bryant, and eventually (probably) Javier Baez again), but I don’t see any reason to stall him either. If another injury occurs and the Cubs need an infielder, whether that happens tomorrow or in mid-July, he’ll be ready.

But in the meantime, he’s the new best prospect in the best farm system in baseball.

Iowa – It was scheduled as a doubleheader, but only Game One was played due to another dose of rain. The Cubs won that one game, though, by a final of 10-7.
Tennessee – The Smokies won their home opener by a score of 5-4.
Myrtle Beach – Myrtle Beach was rained out again. That is their third rain out this week.
South Bend – In another ten inning contest, South Bend lost 7-6.