This Week In The Minors: Sample Size Alert Skip to content 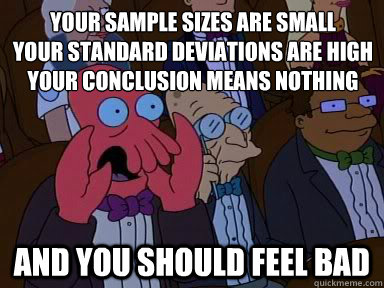 The nature of what I do, constantly monitoring well over a hundred players spread across four teams (later six teams) plus extended spring training, means that I have to rely pretty heavily on stats. I watch as much video as I can, but I both lack the time to study all the video I have and I never quite have all the video I’d like to study. In-person observations are great when I can set it up, but, as this weekend’s rain-cancelled excursion to Iowa has shown, making that trip isn’t always as easy as it sounds.

The reality is that I need numbers and lots of them to keep track of all things that are taking place in the Cubs’ farm system, and yet for the first few weeks of every season those numbers mean very little. It is the sample size problem again; putting too much stock into baseball numbers that are produced over a short period of time is asking for trouble. That risk is multiplied when we factor in all the other unique factors that crop up in the minors.

In short, there is a giant Sample Size Alert stamped on pretty much everything I’ve written since Opening Day, and that Sample Size Alert will remain in place for another week or two yet. That means, for example, that we shouldn’t get too excited by the 8.1% walk rate posted so far by Albert Almora, but nor should we be crushed by his On Base Percentage of just .270*. It is just too early for that.

*Actually, his five hit game yesterday jumped his OBP from .270 to .357 (while dropping his walk rate slightly). That just shows the difficulty in dealing with baseball numbers when the sample size is small.

The Cubs are sitting right at .500 and 2.5 games back of first place Oklahoma City, and that is probably about the best we could have hoped for given the setbacks this team has had. Javier Baez has not played, Dallas Beeler is injured, Tsuyoshi Wada (who may head straight to Chicago) had been out, and now Kris Bryant has been promoted. I think it is safe to say that today’s Iowa team is not the best group of players that will take the field for these Cubs this season.

That said, this is still a really interesting team that stars one of the three or four best prospects in all of baseball: Addison Russell. As soon as the rain lets up, Iowa fans are well advised to get the ballpark to see him while he is still around. His number may get called as soon as next month.

Never fear, though. There is a wave of talent still lurking in Tennessee that I expect to crash into Des Moines by the end of the summer and that should be more than enough to give Cubs fans lots of very good reasons to head to the ballpark.

The Smokies are stacked with talent, and, while they will see some of that talent head up to Iowa, they should receive ample reinforcements from Myrtle Beach. In the meantime, they are three games over .500 and sitting in first place.

In the early going the offense has been led by expected sluggers Dan Vogelbach (SLG .613) and Kyle Schwarber (SLG .563) as well as less expected sluggers Willson Contreras (SLG .667) and Stephen Bruno (SLG .462). And the pitching, particularly the starting pitching, has generally been just as effective. Starters Felix Pena and Ivan Pineyro both have pitched 10 innings or more and both have a WHIP under 1.000.

Myrtle Beach has lost some time to rain delays this past week, but they still lead their division in the wins column and hold a clear one game lead in first.

One very good early sign for the Pelicans is their league leading team On Base Percentage of .352. Mark Zagunis, Billy McKinney, and Daniel Lockart all have OBPs over .400 to lead the team, and the lowest OBP among the regulars is a not-awful for the early season .292 (by Carlos Penalver).

Even allowing for that production at the plate, the best part of this team is almost certainly the pitching staff. As a team they lead the league in strikeouts, and starters Duane Underwood, Jonathan Martinez, and Jen-Ho Tseng are all three still boasting a sub-1.000 WHIP.

South Bend has already played quite a few games that were close late or went into extra innings, and as a result they are probably a little better than their record indicates. For example, this team is actually second in the league in both team OPS and runs scored.

The pitching has been more average than the offense, but that is despite the emergence of Jeremy Null as a dominant starter and Ryan McNeil proving to be a notable weapon out of the bullpen. Ryan Williams has barely allowed a base runner through two starts, and if it weren’t for a weird bout of wildness in his last start I would once again be piling the praise on Jake Stinnett.

But to get back to the offense, the South Bend lineup features one of the biggest early season stories in the organization.

Through the first week and a half of the minor league season I have had more fans ask me about Cael Brockmeyer than any five other players. Not even Bryant and Russell are drawing the kind of curiosity the Low A catcher has received, and it is easy to see why.

Brockmeyer currently has a slash line of .441/.513/.706 with nine strikeouts and five walks over thirty nine plate appearances. Seven of his fifteen hits have gone for extra bases, and his OPS of 1.219 is nearly twice as high as the next guy on the team.

And yet, this is a guy that many Cubs fans haven’t heard of. He did not make most top prospect lists (including the Top 40), and while the early success is welcome it probably isn’t enough to change any minds. Brockmeyer remains squarely on the fringe; he could easily move up the charts with sustained success at higher levels, but he could also fall off.

The catch with Brockmeyer is his age. He was 21 when he was drafted out of California State University in 2013; now 23, he hasn’t made it out of Low A yet. Some of that is because of the numbers of catchers ahead of him in the farm system and the difficulty in finding them all enough playing time, but that doesn’t negate the point that he will need to show that he can produce against tougher pitching.

Right now Brockmeyer is well above the average age for the league and several years older than the age at which we expect to see serious prospects in Low A. He put up good numbers in the Midwest League over 77 games last year, but that just gives me more reason to remain unexcited by his 2015 success. He is doing exactly what we would expect a guy in his situation to do. That is a good thing, but it doesn’t move the needle much, if at all.

Hopefully soon the Cubs find a way to get him to High A Myrtle Beach. That is when we’ll start to get somewhat better data on his bat, but based on the peripherals both this season and last I doubt he will be really challenged until he runs into Double A. Ideally that would happen this season as well, but I have my doubts it will play out that way.

Still, he is showing signs of becoming a patient power hitter and the initial reports on his defense behind the plate are promising, so we shouldn’t forget about him altogether. Given his age and level, though, caution is definitely in order.