BT at BP: Extreme Shifting and the Runner in Scoring Position Skip to content 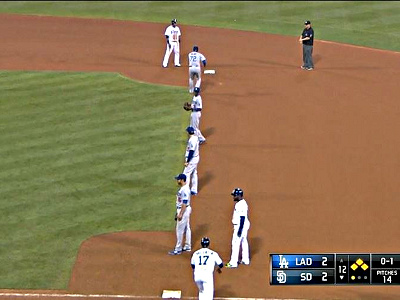 [Baseball Prospectus now has a Chicago Cubs-centric site called BP Wrigleyville, led by friend of the program, Sahadev Sharma. I’ll be contributing there about once a week, and you’ll see me posting here a portion of my articles from over there. Like this one, which originally ran at BPW on Friday – otherwise known as Kris Bryant Day. Since it got buried a bit, and the subject discussed became all the more relevant when Jonathan Herrera messed with James Shields’ mind at third base thanks to the extreme shift, I wanted to save it to share today. Which is what I’m doing now. Enjoy.]

The Chicago Cubs won a handful of exciting games this week, beginning with a ninth inning comeback against the Rockies in Colorado on Sunday. Dexter Fowler took a two-strike offering from yes-he’s-still-pitching LaTroy Hawkins, and deposited it well over the right-field wall, turning the Cubs’ one-run deficit into a one-run lead that they would not relinquish in the bottom half of the inning. It was the kind of game the Cubs did not win in 2014—literally, they did not win any games in 2014 when trailing after eight innings—and it felt like an early turning point in the Cubs’ competitive efforts.

But I’m not going to talk about the top of the ninth.

Instead, there was a very interesting series of moments in the bottom of the ninth on Sunday, which didn’t, and won’t, get much discussion, given the Cubs’ dramatic win.

Let me set the scene: with two outs, against Cubs closer Hector Rondon, Charlie Blackmon doubled, representing the tying run at second base. Carlos Gonzalez came to the plate needing only a single to extend the game. Gonzalez, who bats lefty and is a pull hitter, has a career spray chart that looks like this: A near perfect candidate for the extreme shift, Gonzalez’s groundballs beg for three men on the right side of the infield, and a single infielder on the left, somewhere in the vicinity of the traditional shortstop spot. So, naturally, the Cubs obliged ….

To read the rest of the article, head over to BP Wrigleyville.