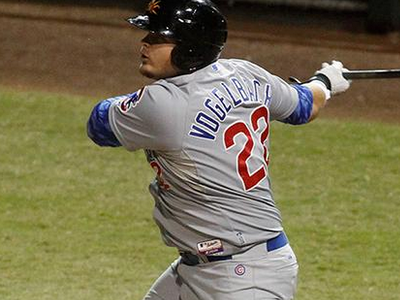 From the day he was drafted by the Chicago Cubs in 2011 – an over slot second rounder – the promise of Dan Vogelbach has looked quite a bit different from the performance. A big dude with big raw power, Vogelbach was sold as a masher, who was likely to put up video game power numbers, and might be a sufficiently good hitter all-around to make up for any defensive deficiencies.

In terms of his overall offensive performance, Vogelbach has largely been that guy – but in a different way than expected. The huge power hasn’t really manifested in-game. Instead, what Vogelbach has been so far in his professional career is an incredibly good overall hitter, with solid power. In other words, Vogelbach has looked like a better hitter than we thought, but with less power. Over 339 professional games, Vogelbach’s career line is .290/.380/.485.

Maybe the power will still come – he’s only 22 – and maybe it’s partly been the product of playing in some leagues that don’t exactly help showcase a young player’s raw power. But maybe it’s not going to matter if Vogelbach isn’t an all-world power hitter if he keeps showing off elite contact, discipline, and hit skills.

For the first week of the Southern League’s season, Vogelbach’s first at AA, all the first baseman did was hit .484/.579/.613 en route to being named the Player of the Week in the league. In 38 plate appearances, Vogelbach has struck out just 3(!) times, and has walked 7 times. Sure, the .536 BABIP is going to come way down, but the discipline numbers are off the chart.

This is coming off of a year where, by many traditional measures, Vogelbach was not dominant offensively – something he’ll need to be in order to carry his prospect status up the ladder – but he was actually still one of the best hitters in the pitcher-friendly Florida State League. Luke ranked Vogelbach 20th in the Cubs’ system before the season.

Long-term, it’s hard to say what the future holds for Vogelbach with the Cubs. He’s eligible for the Rule 5 Draft after this season, so the Cubs will have to add him to the 40-man roster, lest some AL team poach him and give him a go as a DH. With Anthony Rizzo entrenched at first base, there’s no clear spot for Vogelbach as a starter with the Cubs in the coming years, and, even if the bat is fantastic, it’s hard to see how he could carve out a role as a bat-only pinch hitter. That would seem to suggest that a trade, likely to an AL team, would be the most likely path, perhaps as soon as this Summer.

That said, you never really know how things are going to play out. What we know for sure is that it’s good for Vogelbach and good for the Cubs if he continues to rake. So, his absurd start at AA is very nice to see.