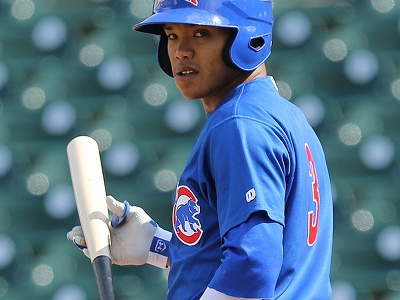 When I wrote yesterday that Addison Russell was probably coming up to the big league team “soon,” I’m not sure even I expected it to be this soon. Then again, as I wrote, if the front office feels like he’s ready – developmentally, and in his ability to contribute – there’s really no reason to wait. The Chicago Cubs are playing meaningful games right now, and every little bit counts. Waiting for Russell to achieve some plate appearance limit at AAA or to be clear of the Super Two arbitration cut-off in June is simply not something that the Cubs should be worried about right now. The extra year of control is secured – just as it was with Kris Bryant – so the only consideration, again, is Russell’s readiness. The Cubs feel he’s ready at the plate and at his new position, second base, to seriously contribute. So away we go.

Russell will be in Pittsburgh tonight, playing second base. Giggity.

For Addison Russell day… Here's a spray chart of all his MiLB hits since 2013. pic.twitter.com/nfy4LHIz4Q

Addison Russell could get his first major league homer before Kris Bryant.

I wonder what the pre-season odds on that happening were.

And some great parting shots of Russell from Iowa, courtesy of Dylan Heuer (including the shot that adorns the top of this post):

BN’er Dylan Heuer, who is a fantastic photographer (http://www.dylanheuer.com), shares what might be the final set of shots of Addison Russell at AAA Iowa.