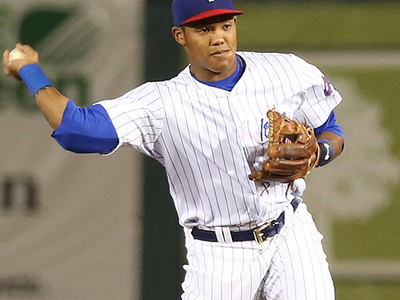 With no game yesterday, there are no highlights or lowlights to share, discuss, and dissect.

But no fear! I hadn’t yet had a chance to share Addison Russell’s absurd, diving play on a Billy Hamilton grounder from Friday night, and I’d like to do that now. Because it really deserves a spotlight for just how impressive it was:

First of all, off the bat – the bat of Hamilton, anyway – that looks like an easy single, even if a fielder manages to get the ball. It’s up the middle, and Hamilton’s just too fast. Secondly, at that point in the game, any Hamilton single with no outs is effectively a run. As he showed the first two times he reached base, there was absolutely nothing stopping him from getting to third base in the span of about two pitches, and then it takes only a ball in play to score him.

So, base hit for Hamilton, run for the Reds.

Except Russell dove and got to the ball. That’s cool, but, again, on a ball going away from first base, you’ve just got no chance on Hamilton, and that goes triple if you had to leave your feet.

Except Russell pops up so quickly and throws, basically in the process of popping up. He got just enough on it, complete with keeping it low, that he somehow nailed Hamilton.

I’ve had to watch this thing about 10 times to wrap my head around how he pulled it off. The play got a lot of love that night, but I’m not sure it got enough love. You could repeat that play 100 times with 100 different second basemen, and I’m not sure Hamilton’s out more than once or twice. The execution and timing simply had to be perfect.

So, on a very forgettable night at the plate, Russell essentially robbed a homer on that play, more than making up for the offensive weakness. Then you remember that he’s just now transitioning to second base, and think about the awareness that was required on a play like that … from a 21-year-old in his first week in the big leagues … so impressive.

And the bat will come around eventually.