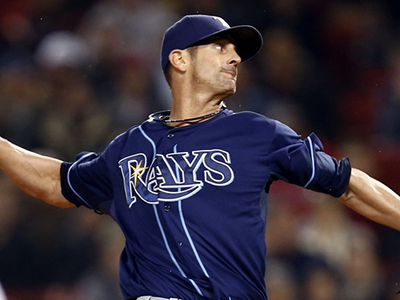 With the Chicago Cubs’ bullpen in a state of flux and dealing with injuries, and with the front office’s penchant for exploring any and all fringe options, it should be no surprise that the team is reportedly interested in recently-released reliever Grant Balfour.

Patrick Mooney reports that Balfour, who pitched for Joe Maddon last year in Tampa Bay, is on the Cubs’ radar.

Balfour, 37, signed a two-year, $12 million deal with the Rays before the 2014 season, and the team will be on the hook for the $7 million he’s owed in 2015 (less the Major League minimum if he’s picked up by another team). That came after his more lucrative deal with the Orioles very publicly fell apart thanks to Baltimore’s concerns about Balfour’s physical.

With the Rays, Balfour struggled, posting a 4.91 ERA, a 3.95 FIP, a 4.49 xFIP, and an ugly 15.2% walk rate over 62.1 innings in 2014. This season, after several successful appearances and then one very bad outing, the Rays decided they’d seen enough. Balfour’s fastball was down 2 MPH in the early going this year, hanging around 90 MPH. Through 4.1 innings of work, he has yet to record a strikeout.

Before 2014, Balfour had been an excellent reliever with the A’s, and, before that, Maddon’s Rays.

When he was DFA’d last week, Balfour told the Tampa Bay Times that he might take some time off before deciding what to do next.

So, to the extent the Cubs do pursue Balfour, don’t expect a lights-out, late-inning reliever. Instead, it would be a potential middle relief target on a no-risk deal, and a guy with whom Maddon is familiar.

As we’ve seen, bullpen depth can evaporate quickly – indeed, it could evaporate even further from here – so there’s no harm in having a large number of options available. And, as we’ve also seen, reclamation types can surprise you when there’s a history of success.