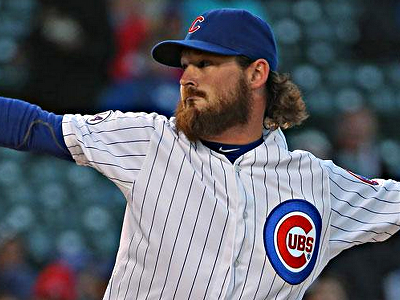 Despite facing the same Pirates lineup just one week earlier, Travis Wood continued his hot start to the 2015 season, with a seven inning gem on Tuesday night at Wrigley Field. Giving up five hits and two earned runs, Wood walked nobody and struck out nine batters, solidifying his fantastic start to the season.

Through his first four games, Wood’s stats, both traditional and advanced, have mostly been fantastic:

Equally encouraging, he has passed the eye test. During last night’s game, Wood looked confident, was commanding his pitches and hit at least 92.6 MPH on his fastball more than once (some 3 MPH faster than his average).

Undoubtedly, his hot start has provided optimism for the rest of the season, and many continue to hope that Wood’s poor 2014 was more of an outlier than his 2013 All-Star campaign.

Having read in the comments here on Bleacher Nation that Wood got off to an equally hot start through his first four games of the 2014 season, I set out to see if that was true, and if there were any underlying reasons why his results in 2015 may be more sustainable.

You don’t always find what you expect to find when digging through the numbers, though. Here are the stats from above, next to those same stats through Wood’s first four games in 2014:

As you can see, 2014 Wood was actually better in 8 out of the 10 categories listed above. Notably, he walked fewer batters, induced far more ground balls and let fewer fly balls leave the park – numbers that are ultimately reflected in his lower ERA and FIP. Moreover, Wood accomplished all of that while carrying a much higher BABIP. That suggests that, despite having better numbers through his first four games in 2014, Wood has actually been more lucky in the early going of 2015.

None of this means that you should immediately lose confidence in Wood, though. It’s too bad that he couldn’t keep up his hot start to 2014 throughout the year, but that doesn’t mean, on its own, that the same thing will happen to him in 2015. And, at the end of the day, having good peripherals is a good sign, period.

Yes, Wood is a fly ball pitcher, and the cold April starts have probably helped limit some damage, but perhaps less so this year than last year, when three of his first four starts came at Wrigley. This year, just two of four were at Wrigley, while the other two were at Pittsburgh and Colorado, both of which have skewed toward offense-friendly this year. Further, the opponents Wood faced in those first four starts – the Pirates, the Diamondbacks, the Yankees, and the Phillies – were slightly weaker offenses, overall, than the teams Wood has faced this year.

In the end, Wood’s peripherals are still strong and he’s striking out more batters this year (27.7%) and letting fewer men on (1.06 WHIP) than he did in April of 2014. So for now, let’s just hope he can continue doing what he’s been doing and take advantage of his success, however long it lasts.