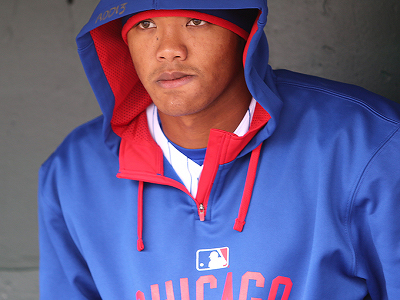 In search of perspective in light of the Cubs’ recent call-up of shortstop-turned-second baseman Addison Russell? Look no further than the line-up that took the field three years ago to the date Russell made his debut.

The starters represent a who’s who of “Where Are They Now?” candidates.

Darwin Barney, Ian Stewart and Steve Clevenger are playing for the Triple-A affiliates of the Dodgers, Nationals and Orioles, respectively.

Bryan LaHair, who the players voted onto the All-Star team in 2012, hasn’t taken a big league at-bat since 2012. Neither has Joe Mather, who started that game in center field.

Of the eight position players to start that day, the only players still on an active major league roster are David DeJesus and Starlin Castro.

Reed Johnson, who delivered a pinch hit double, is on the Nationals active roster, but buried on the depth chart behind Bryce Harper, Denard Span and Jayson Werth, among others.

Tony Campana, who also pinch hit and played center field that afternoon, was released by the White Sox in March after he tore his ACL in spring training.  His release came only 95 days after signing a minor league deal in the offseason.

As fate would have it, I was there when Paul Maholm started for the Cubs on April 21, 2012.

Maholm was relieved by James Russell, Rafael Dolis and Carlos Marmol. And while Russell (Iowa) and Dolis (Toledo) are pitching in Triple A, none of that day’s quartet of arms is on a major league roster.

Some of the players on that roster helped shape today’s team. Maholm and Johnson were dealt to Atlanta in exchange for Jaye Chapman and Arodys Vizcaino, who was later flipped back to the Braves in exchange for infielder Tommy La Stella, who is currently on the disabled list. So, at least they weren’t completely without value.

The organization’s roster overhaul over the last three seasons has nothing short of remarkable. Especially considering the lone constant since Opening Day 2012 has been Starlin Castro.

The organizational depth has been put to the test of late, but it’s come a long way since 2012.

That win on April 21 was one of 61 wins the Dale Sveum led Cubs would get in 2012. The 101 losses were the second most in baseball as the organization turned in its first 100-loss season since 1966.

The pay-off for such a disastrous season was the No. 2 pick in the 2013 draft. A pick used to select Kris Bryant, a third baseman from the University of San Diego.