This Week In The Minors: So Much Video, Including Vogelbach Triple and Schwarber Homer Skip to content 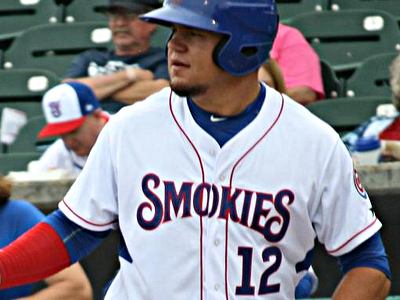 The Cubs and Cubs affiliates are winning almost everywhere you look. Counting the major league team, this organization is entering the month of May with two teams in first place, two teams in second, and one in third. No matter how you slice it, that is a good month.

It did not come without issues on the prospect front, though. Just from the top tier of Cubs’ prospects we see that Albert Almora is on the disabled list, C.J. Edwards has been rocky at times, Javier Baez (not technically a prospect anymore, but still worth mentioning) has missed much of the season so far, and Pierce Johnson has not yet left extended spring training. So there is some bad.

As for the good? We’ll get to that.

The Triple A Cubs did not have the best of weeks, and they finished it pretty much where they started – in third place. Even though it is barely May, though, the Cubs already trail a remarkably successful Oklahoma City team by eight and a half games.

The Iowa team leader in home runs a month into the season is still Kris Bryant with three, and he only played seven games there. As you might expect from that figure, things have not been easy for the Cubs on the offensive side of the ball this season. The Cubs are fourth from the bottom in the league in team OPS this year (.707), but believe it or not, the dead last place team is the same Oklahoma City squad that has already won eighteen games. They have an OPS of just .650.

The Smokies remain in first place by a game and a half over both Birmingham and Chattanooga. Montgomery sits two games back, and last place Jackson is just two and a half behind the leading Cubs’ affiliate. In short, this division is still wide open.

The Smokies remain the best hitting team in all the Southern League with a .774 OPS, but Montgomery and Chattanooga are right behind them at .743 and .740 respectively. On the mound, Tennessee is right about the middle of the pack in most key categories.

Myrtle Beach is also a first place team and is tied with the Smokies for the best record in the organization. The Pelicans lead Salem by a game in the division, and both Winston-Salem and Carolina by a game and a half.

While Myrtle Beach has done well compared to the rest of the league in most categories of pitching and hitting statistics, two figures jump out at me. On the mound, they have given up the second fewest walks in the league (55 over 21 games), and at the plate they have the second highest team OBP at .325. Those are two very healthy trends both from a team and an organizational player development standpoint.

Tennessee and Myrtle Beach have the better winning percentages, but the most wins in the farm system have actually been earned by South Bend. The Cubs had a very good week and now find themselves playing very good baseball and sitting just one game behind a first place tie between Bowling Green and Lansing.

One key to the Cubs success has been home runs. Even though they have only hit 5 round trippers themselves, the South Bend pitching has given up just 3, the fewest in the league.

I can’t think of a better way to cap off the first month of the season than with a small collection of a few of the best highlight videos to come from the farm system this season. I’m limiting myself to just three videos per minor league team, otherwise we would be here all day.

Need to break up a perfect game? There’s an Addison Russell for that.

Not only did Dan Vogelbach triple, he tripled on a hit to left field. This wasn’t exactly a case of blazing speed, though.

Watching Elliot Soto play shortstop is a lot of fun. Unless you are on the other team.

You will be hearing a lot more about Jeimer Candelario as he moves up the system, so why not watch him hit a game winner now?

Duane Underwood is one of the best pitchers in the Cubs’ organization. Winston Salem found that out the hard way.

He is almost as fast as his name is famous. Almost.

Gleyber Torres started a little slow, but lately he has been as hot as any hitter in the system.

Cael Brockmeyer started anything but slow, and this might have been his biggest hit so far.

One player we were not talking about before the season started was Chesny Young. After a strong April, he is well worth watching.