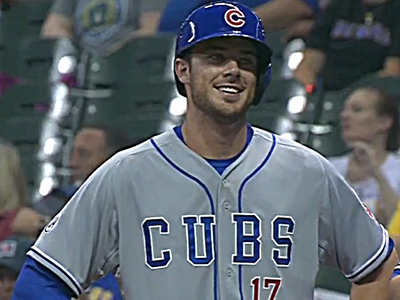 Last night’s game against the Brewers felt like a particularly nice one to win given not only the preceding four days in St. Louis, but also the three-game series against these Brewers that preceded that. Sure, the bottom of the 9th got dicey and the Cubs struck out an insane number of times, but there was a lot to like in that one.

Things started out the right way, with Dexter Fowler leading the game off with a deep blast:

A few innings later, Anthony Rizzo and Jorge Soler wrecked a couple balls of their own:

On the power side of things, Starlin Castro capped the night off with a huge blast of his own, which I can’t embed, but I can link you to here.

If you want to watch all four homers on a loop, I direct you to this video, which you should watch for a good two, two and a half hours to start your day off right.

It wasn’t just homers that provided the Cubs the win, though. There was also Chris Coghlan’s huge defensive play to nail Adam Lind at home and hold the Brewers to just one run in the first inning.

And, of course, there was Kris Bryant’s hustle play of the night:

That’s just a groundball to shortstop. That’s all it was. Maybe it was slightly toward the hole and a little choppy. But, off the bat, there was no reason to believe that would be anything but a groundout. Segura hesitated just for a fraction of a second – thinking about throwing to second – and that was all it took, because Bryant was busting it out of the box the whole way.

After the review, Bryant was safe, Addison Russell (who hustled his way to third) scored, and the Cubs had an insurance run that would prove to be the difference in the game.

You’ll probably want to sit down so that you don’t swoon yourself into an injury:

Bryant: “That’s a part of the game that I can control. No matter how bad the game is going I can always run hard.”