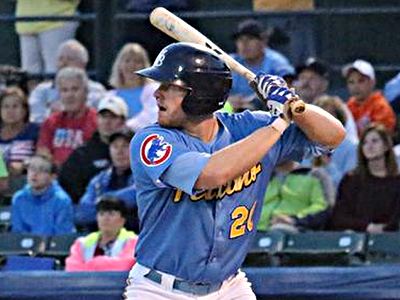 The Chicago Cubs have an organizational philosophy on minor league promotions: in addition to fulfilling the specifics of an individual’s player development plan, the Cubs like to see guys dominate at a level before they’re bumped up the ladder.

Billy McKinney offered a perfect example of what dominating a level looks like.

After coming over to the Cubs last year in the big trade with the Oakland A’s, McKinney played well at High-A. It was an advanced level for a guy who was playing high school ball the year before, but he met the challenge. From there, McKinney started at High-A to begin this season, and instead of merely meeting the challenge, he hit .340/.432/.544 with 17 walks and just 13 strikeouts (and won an award). He is clearly one of the best offensive prospects in a system with lots of great offensive prospects.

So, despite being just 20 years old, the Cubs are pushing McKinney up to the next challenge. He’s departed the Myrtle Beach Pelicans in favor of the Tennessee Smokies, where he’ll primarily play in a corner outfield spot, with Albert Almora already locked into center field, and Jacob Hannemann already picking up any stray starts there in center.

Speaking of which, unless an injury pops up, that’s a very crowded outfield at Tennessee, featuring not only McKinney, Almora and Hannemann, but also Bijan Rademacher (not to mention Anthony Giansanti, who can move around, and Kyle Schwarber, who hasn’t yet been playing the outfield there, but it could come). Having the DH will help, but it’s a lot of prospects to accommodate.

What a lovely problem.