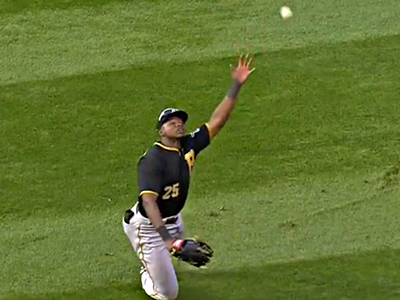 Even if you don’t consider the fact that the bottom of the 12th inning played out like a crazy mirror image of the 10th inning, this walk-off was nuts.

But you throw in the fact that Starlin Castro reached, Miguel Montero singled, Jorge Soler was intentionally walked, and Matt Szczur popped to shallow right field with one out in BOTH innings, and this is just bananas. The first time, Castro tagged at third and was easily thrown out at the plate.

The second time, this happened:

Polanco was obviously trying to set himself up for the throw – though this time it looked like Castro wasn’t going to tag up – and he hit a soft spot, lost it on one step, and then it was all over. He was going down. What a way to end the game. Can you imagine how Pirates fans are feeling right now after seeing their team come all the way back in that one only to lose it like that?

As for the Cubs, I love the rally Double Bubble bucket hats they were wearing the dugout, and I especially love that Jonathan Herrera left his on for the celebration. I also love that JD drops the “un-freaking-believable” on the ending. It so was.