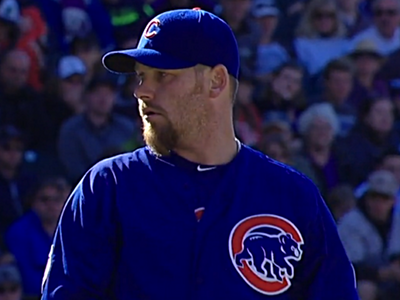 With the Cubs at 10 relievers now that Travis Wood is the bullpen and Brian Schlitter was brought up as emergency depth over the weekend, you knew at least two would be on their way out by tomorrow. If you guessed Schlitter and Phil Coke, you guessed right.

Carrie Muskat reports (later confirmed by Bruce Miles and Gordon Wittenmyer (and see update below – it’s official)) that Coke will be designated for assignment and Schlitter will be optioned back to AAA Iowa tomorrow before the Cubs play the Padres in San Diego. That will take the Cubs’ bullpen back to an only-slightly-bloated eight members.

Taking their spots on the roster will be, as expected, Junior Lake (who, in a roundabout way, is actually replacing Matt Szczur, for now), and Tsuyoshi Wada. If the Cubs wanted, they could have brought up someone else on Tuesday – Wada doesn’t start until Wednesday – or waited to move out Coke or Schlitter until Wednesday. Perhaps they don’t see that necessary for just one day.

As for Coke, although he signed a minor league deal with the Cubs in the offseason, that became a big league deal when he was placed on the 40-man roster before the season started. For that reason, and because he has so much service time, Coke would have to consent to being optioned to the minor leagues. Since he can keep his $2.25 million contract even if he refused the option (or an assignment if he’s outrighted) and then go sign wherever he’d like (with the new team on the hook only for the Major League minimum), the Cubs will have to designate him for assignment. Once they do, the Cubs will have 10 days to trade, release, or waive Coke. It’s unlikely that a trade will happen, and it’s also unlikely Coke will be claimed on waivers. Thus, the end game here is going to be Coke off of the big league roster, and either signing with a new team – likely on a minor league deal – or deciding to stay with the Cubs organization and head to AAA Iowa.

Thanks to a huge BABIP and home run rate, Coke sports the unusual giant ERA (6.30), low FIP/xFIP (3.55, 2.95) combo over his 10 innings of work this year. As expected, righties have been absolutely pummeling Coke (.368/.429/.722), but he’s struck out eight lefties while walking just one over 5.1 innings this year. If it weren’t for the unsightly .467 BABIP against lefties, Coke probably looks like a LOOGY star right now (even though he hasn’t quite been used that way).

In the end, I think Coke probably could have been a fine LOOGY for the Cubs this year, but bullpen injuries and weirdness required Joe Maddon to use him more liberally, and he got crushed. We’ll see what happens next.

UPDATE: All of these moves are now official, according to the Cubs transaction page.