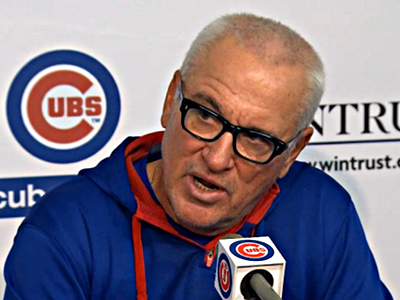 Batting practice can be a thing of beauty.

The sound created when the ball meets the bat and the fun that comes with following its trajectory into (and sometimes, beyond) the bleachers is great for the senses.

This isn’t a new thought for the first-year Cubs manager, who called BP “the most overrated ritual in all of professional sports” in 2013 while managing the Rays.

Nor is it a new practice for Maddon-led teams as he has kept his teams from taking batting practice before most day games in as he continues to value player rest and comfort, even if it goes against baseball norms.

You can watch Maddon speak on it here, via the Chicago Tribune.

The Cubs skipped batting practice for the second straight day on Friday, yet, the Cubs scored 11 runs on 15 hits in a wild and wacky win that featured home runs from Kris Bryant and Anthony Rizzo.

So, who needs batting practice again?

Not to say batting practice isn’t without value.

Batting practice isn’t always about the hitter, per se, as the routine gives ample fielding practice. And that is something Maddon seems to value more when it comes to this long-time pre-game custom.

“I like getting ground balls. I like getting loose,” Maddon said on Friday, per Cubs.com, in regard to batting practice. Back in 2013, Maddon said: “BP is probably more important for defensive work. Once we’ve played a certain number of games, it can become something that’s overdone.”

Maddon cautioned that batting practice can often turn into Home Run Derby, which can be counterproductive to a batter.

Interesting to note that Angels star Mike Trout famously sat out of the 2014 Home Run Derby with concerns it would take a toll on his body, telling the Los Angeles Times: “The biggest thing is just the big swings you take over a period of time; you can get beat up a little bit. It’s tough on your body ….”

If a single extra session of BP during the season’s longest break can take a toll on a player’s body, I can see where there managers or coaches would be concerned about it on a day-to-day basis.

Playing 162 games in 183 days can be taxing, even on the well-tuned, highly-conditioned bodies of professional athletes. And Maddon’s batting practice philosophy is simply another example of him implementing his laid-back style and attempting to put his players in a good position mentally and physically over the course of the season.