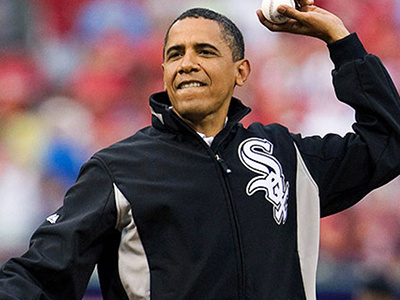 The most dangerous post I’ve ever written. No, not because of the risk of political blowback at the highest levels …

Because the comments on this post risk being an utter disaster. I could, of course, avoid the problem by not making the post at all, but, you know, it’s an off-day. Caution —> wind. All I’ll say is that, technically, there are ways to discuss this and have fun with it WITHOUT discussing politics. I’d strongly encourage that. That’s my approach, anyway.

And former-Chicagoan Barack Obama followed every major sports team in Chicago … except the Cubs:

As you may know, President Obama is a noted White Sox fan, so the dig here is probably both intentional and light-hearted. (Plus there was the whole Wrigley-renovation-funding-Joe-Ricketts-PAC thingy a few years ago that I really don’t care to get into.)

I actually respect someone who has their team and won’t kowtow to rivals for reasons other than fandom. You chose the wrong team, Mr. President. But as least you chose.

As for the fun in this, keep in mind: the President does have a good sense of humor …