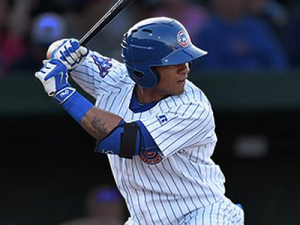 Once you get past the upper levels of the Chicago Cubs minor league system, I don’t think there have been two more obvious and clear breakout prospects in the Cubs’ system than shortstop South Bend’s Gleyber Torres and Tennessee’s (formerly Myrtle Beach’s) Billy McKinney.

Each was already among the Cubs’ top ten prospects heading into the season, and, with guys like Kris Bryant, Jorge Soler, and Addison Russell graduating to the big league level, Torres and McKinney figured to be top five-ish prospects in the Cubs’ system by default at midseason.

But what they’re actually doing is cementing themselves as top five prospects in the still-loaded system with any kind of default required.

At Low-A South Bend, a full season league populated mostly by recent college draftees and younger, multi-year pros, Gleyber Torres is dominating as an 18-year-old with minimal pro experience, all while playing shortstop. Presently, Torres is hitting .324/.409/.410 over 37 games with just 31 strikeouts and 19 walks. Eyes-on reports have him looking at least adequate at shortstop, and projectable there for the foreseeable future.

At High-A Myrtle Beach, Billy McKinney could do no wrong at the plate, hitting .340/.432/.544 in 29 games, striking out fewer times (13) than he walked (17). That earned him accolades and a very early promotion to AA Tennessee (where he’s also succeeded in the early going), which said a lot given how full that outfield already was with prospects. Like Torres, McKinney is extremely young for his level at just 20 years old.

Given the performances, then, it’s no surprise to see each of Torres and McKinney get the nod at Baseball America as the early-season breakout prospects in their leagues. The Midwest League, where Torres has been raking, is not always kind to hitters, and BA takes note: “Consider the toll the Midwest League has taken on the top high school picks from the 2014 draft, such as the Twins’ Nick Gordon (80 OPS+), the Mariners’ Alex Jackson (40) or the Tigers’ Derek Hill (62).” What Torres has done, then, is all the more impressive. McKinney comes in for specific praise on his pitch-recognition and contact skills, something we know the Cubs love. If the power comes along just a little bit – as it very well may, since McKinney has the body to support it and is just 20 – McKinney is going to look like a very legit future big league corner outfielder.

Circling back to the beginning: with guys like Bryant, Russell, and Soler graduating off of prospect lists, the top 100s of the world will have to include additional names. MLB.com has already updated its list to reflect recent graduations, and sliding into the number 98 spot: Gleyber Torres. He’s officially a top 100 guy. And I very much suspect that when the other top 100s are updated at midseason, you’re going to see that Torres is a universal top 100 guy.

And when Bryant and Russell graduate off of the MLB.com list in the next week or so, I also suspect you might see McKinney joining Torres.