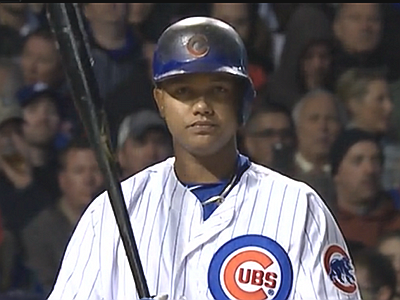 First, a note on tonight’s batting order: it’s nuts. Totally re-vamped. But I like it for tonight against Max Scherzer:

If Jorge Soler is getting a day off, and if David Ross is starting, well, then, what the heck – shake it up.

I’m going to assume that today’s lineup is something of an aberration driven by the peculiarities of tonight’s matchup and personnel, rather than a fundamental shift in lineup theory. If Joe Maddon says otherwise, then we’ll talk about that.

Specifically, I’d like to talk about the cleanup spot and Starlin Castro, something Joe Maddon yesterday indicated he’s inclined to continue using.

Although I don’t agree with Starlin Castro remaining in the four-hole, I do respect that Joe Maddon is talking about the issue and is being thoughtful about where Castro bats, rather than just sticking with something to stick with it. See his discussion of the top here at CSN, where Castro’s terrifyingly increased proclivity to roll over outside pitches for weak grounders to the left side are acknowledged. To Maddon, it sounds like, that’s the issue to fix, not moving Castro out of a certain spot.

I don’t know that you can entirely disagree with that, but my rejoinder would be: does Castro have to bat in such an important spot – behind two of the best OBP men in baseball – while working out his current issue? Maddon asks about alternatives and about giving protection to Kris Bryant (are pitchers really all that concerned about facing Castro right now?), and, the truth is, I’d be fairly comfortable with any of Miguel Montero, Chris Coghlan, or Jorge Soler in that spot. As for Castro, I can understand not wanting to bat him 7th, with the pitcher behind him, because that could just as easily cause a more pronounced slump (going out of the zone), rather than forcing Castro to better identify pitches and wait on drivable ones.

When you try to come up with a better 4 through 7, though, you immediately see the real issues: who bats 7th, and how do you stay lefty-righty balanced if Anthony Rizzo bats third? I can understand why you might not want to have Castro there at 7, and you don’t want to have Soler there for probably the same reasons. That leaves Montero and Coghlan on most days, and, assuming one of them gets that spot, it gets a little trickier staying balanced with Castro in 5 or 6 and Rizzo at 3. I think I’d probably do Coghlan-Soler-Castro-Montero as 4-7, and I’d have Rizzo at 2 and Bryant at 3, but I can understand why some wouldn’t like that one. (Just don’t tell me about Coghlan’s line – the guy has a walk rate near 10%, the third highest hard contact rate on the team, a huge ISO, etc.)

I could also see having Montero up at 4, and Coghlan staying down at 7. In either case, I don’t yet want to see the Cubs moving Addison Russell up the order, as he’s really starting to thrive where he is, and I suspect the reduced pressure, combined with having the top of the order lurking behind him, has a fair bit to do with that.

That is all to say, there are formulations of the lineup that make sense and don’t absolutely require Castro to hit fourth. I’m not irate about it – because, again, it’s not single-handedly killing the offense – but I do think it’s worth continuing to monitor and discuss.

Castro’s season line is down to .265/.294/.335 with a .270 wOBA and a 70 wRC+. His strikeout rate is up, his walk rate is way down, and his power is way down. I’ll make sure to say it every time so that I don’t get labeled an unfair Castro basher: I think he can and will turn this around. I’d just like to see him a couple spots lower while he goes through that process. For further reading on Castro’s struggles – recent or otherwise – I suggest checking out today’s Mauricio Rubio, Jr. piece at BP Wrigleyville. A lot of disconcerting charts in that one.