Any Chance Kyle Schwarber Comes Up to Cubs Soon as DH? Skip to content 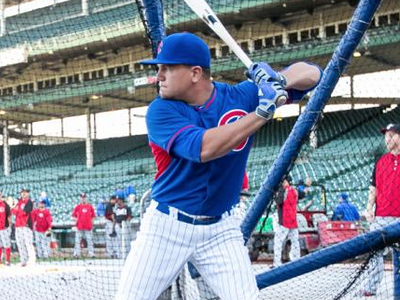 It’s a headline question that might’ve seemed meatball-y or clickbait-y just a couple months ago. But, after dominating at AA offensively in a way that suggests he’s a truly special hitter, and, after considering the way the Cubs’ roster shakes out, I don’t think it’s at all crazy to wonder whether we could see Kyle Schwarber up this week (Cubs play in Detroit tomorrow and Wednesday) or next week (Cubs play in Cleveland and Minnesota next Wednesday through Sunday) as the Cubs’ designated hitter for their upcoming AL games.

But, given the roster’s lack of an obvious high-upside DH option, and now with Javier Baez injured, I do think this is a meritorious conversation, rather than a mere intriguing headline.

Even Joe Maddon conceded that Schwarber should be in the conversation for the Cubs’ DH over the next two weeks (CSN). Even though he hasn’t played above AA yet, it’s entirely possible that Schwarber could out-perform – offensively – the Cubs’ other options on the bench.

So, let’s consider some logistical points: