Rafael Soriano Contract Details, Next Steps, When and What to Expect Skip to content 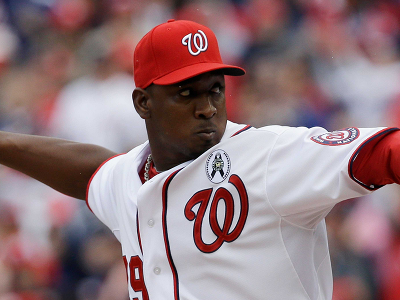 In the middle of the draft, the Chicago Cubs announced the signing of free-agent relief pitcher/”closer” Rafael Soriano to a minor league deal. As speculated, the deal isn’t of the straightforward “minor league” style:

Rafael Soriano has a minor league with Cubs. It's for $4.1M prorated base with up to $4M in bonuses for games finished & appearances.

That prorated amount, then, will ultimately cost roughly $2 million, depending on how soon he’s called up, with another $4 million more in incentives based on games finished and appearances. With up to $6 million at stake, for half a season, this wasn’t a terribly cheap deal, even if the risk is reduced because it’s not guaranteed. Hopefully, that goes to show how much the front office believes in Soriano’s return, as opposed to their recognition of the bullpen’s struggles. I, for one, think it is a positive sign:

Re Soriano: Front office probably doesn't sign a 35 year old closer half way through a season if they don't still think/believe in playoffs

His time spent with Joe Maddon in Tampa Bay may have been what ultimately led Soriano to the Cubs. Maddon thinks highly of Soriano and was always impressed by his abilities. In a series of thoughts that you can read about here, here, here and here, Maddon praises Soriano for his pitching wisdom and knowhow. For his career, Soriano has been primarily a fastball/slider guy with the occasional cutter. His fastball used to sit 93-94 MPH, but has held steady around 91-92MPH over the past few seasons.

Instead of being a guy with overwhelming stuff, Soriano has found success by outsmarting opposing hitters. If you’re going to sign a 35-year-old pitcher, I suppose it’s better to sign a guy that has already succeeded without the type of stuff and/or skills that can deteriorate as one ages.

Soriano hasn’t pitched or faced live hitters since pitching for the Nationals last season, so he will not be joining the Cubs’ bullpen immediately. Currently, he is working out in a training facility in the Dominican Republic. From there, he’ll likely begin a short assignment in the minor leagues before ultimately coming up sometime in July. [Brett: Joe Maddon yesterday told the Tribune that it likely won’t be until the All-Star break. A month seems like a very long time for a guy to simply get ready to pitch if he was otherwise healthy, but I suppose it’s like getting him his own Spring Training].

At that point, several things will be up in the air. Given that his return is not scheduled for at least a month, whom he replaces in the bullpen is a mystery. There are plenty of easy guesses, but without knowing who is succeeding or failing – let alone healthy – my guess is as good as yours (and I’m sure yours is Edwin Jackson). These things have a way of working themselves out, though, and hopefully, everyone is healthy and performing well enough to make this a really tough decision.

On what to expect from his performance, we are equally clueless. He can be the guy from the first half of 2014 that dominated the league; or, he can be the guy from the second half that lost his job and failed to secure a contract for the start of 2015. For what it’s worth, Steamer projects a 3.68 ERA on 26 IP over the course of the season. Soriano strikes me as the type of reliever that will be used cautiously at first, as he returns, given his lack of pitching in 2015. Although he has been working out in the D.R., he is essentially starting his Spring Training now. I suspect we’ll see him in some early game spots at first, not unlike Justin Grimm, before seeing the amount of high leverage appearances increase. With Jacob Turner and Neil Ramirez on their way back and Yoervis Medina in AAA, the bullpen may soon have the depth necessary to succeed.

And that’s before those Jonathan Papelbon rumors start rolling around again.