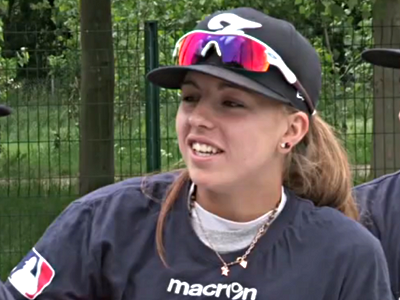 Progress isn’t always about a giant leap forward. Sometimes, it’s just a thing that happens that hasn’t happened before.

A 16-year-old French shortstop on the nation’s 18-and-under team was recently added to the international registration list for signing with an MLB team during the next IFA period, which opens up on July 2. France is not typically thought of as a hot bed for big league talent, so there’s a discussion point there.

But that’s not the thing.

The thing is that the player is Melissa Mayeux, a female. And that’s a first.

You can read more about Mayeux here at MLB.com, and, although anyone can register to be signed, it sounds like she’s one of the better young players in France. Typically, you don’t go to the trouble of registering someone who doesn’t have any shot whatsoever of being signed. Because European players tend not to sign until they’re closer to 18, it’s possible Mayeux won’t actually sign this coming year, but this will put her on the radar for MLB teams.

If she does sign eventually, it will be a fun story to follow. Heck, it is already.

We like to say things like “the game doesn’t care whether you’re a man or a woman, whether you’re black or white, whether you’re gay or straight, etc.” While that’s technically true and I embrace the spirit, I don’t think it’s realistic or even productive to act as though the differences among us aren’t there. Instead, it strikes me as the best approach to celebrate our differences (baseball is an incredibly diverse sport at all levels), and enjoy a story like this for that very reason.

Then, from there, you can step back and put everything back into the baseball context, when we really do no longer care about any of those differences. Can she hit? Does she project for power? How’s her arm strength and range at short? Will she stay there long-term? Is she signable right now for a realistic bonus?

A video from MLB.com on Mayeux: