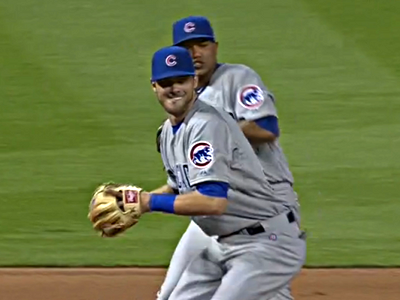 If you had to guess where the Cubs ranked in number of total recorded defensive shifts as of the middle of June, I think most would wager something along the lines of, “Near the top.” Well, like me, you may be in for a bit of a surprise:

Which MLB teams can we document as shifting the most?

That’s right; at the time of Simon’s note, the Cubs were tied for third least amount of recorded defensive shifts (when a ball is put in play) in 2015.

Defensive shifting is a relatively new principal, but is pretty widely accepted around baseball. Of course, some teams engage in more defensive shifts than others, but it is presently believed to be an easily enforceable advantage. So then, when you see one of the most out-of-box managers (Joe Maddon) teamed up with one of the most forward-thinking front offices, a large number of defensive shifts is a reasonable conclusion.

So what’s the deal?

If your first thought was the skipper, Joe Maddon, you’d be incorrect. In fact, Joe Maddon’s Rays were among the top five teams in defensive shifts as recently as 2013 and 2014. Given that the Rays continue to be on top, though, one might wonder if someone else was championing that cause. However, I doubt a manager as successful and well-respected as Joe Maddon was forced into managing in any way other than how he wanted.

Might it then be a discrepancy in the way the data was collected? That’s always possible; we haven’t yet made it half way through the season, so sample size issues can be at fault. The Cubs, though, have quite a bit of ground to make up, if that is in fact the case. Or, it could be an anomaly. The stat is based on documented shifts when a ball is put in play, after all, so maybe the Cubs have gotten an unusual amount of strikeouts, walks, home runs, etc… in spots when the shift was on. Again, though, that doesn’t square them up enough to call it a coincidence.

Perhaps, then, it is the specific infielders the Cubs have at their disposal. Starlin Castro isn’t known to have an especially strong range these days, Addison Russell is learning a new position and Kris Bryant, while not a butcher, isn’t a dominant defensive third baseman. The lack of defensive shifts, then, could be out of necessity, instead of choice.

We’ll see how this evolves as the season goes on. It doesn’t necessarily mean anything at this point. It’s just interesting.