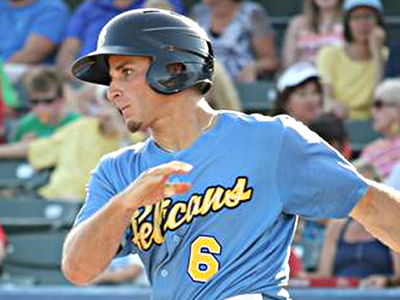 It’s no secret that a player is generally more successful, if he strikes out less and walks more often. While those results aren’t, on their own, the goal; they are the effect of an advanced approach at the plate that tends to maximize performance in the long term. Because of this strong correlation between run scoring and BB/K ratio, Baseball America’s Matt Eddy identified ten hitting prospects who might be better than we think, and the Cubs faired quite well.

Listed below, you’ll find the player ranking, name and BB/SO according to Matt Eddy. You’ll want to check out the article, though, for a full write up on each individual’s performance.

It’s great to see Kyle Schwarber (who’s off to AAA Iowa, after his pit-stop in the Majors) at the top of this list. We already know he has an advanced approach at the plate, but outside, unbiased confirmation is the best kind to receive. Eddy recites Schwarber’s monster stats from AA and validates McLeod’s first round pick.

Billy McKinney, who came along with Addison Russell in the Jeff Samardzija/Jason Hammel trade last year, comes in at number four on the list. At the time this article was published, McKinney was only hitting .250/.294/.380, but Eddy recognized his potential thanks to his young age and solid approach at the plate. After four scorching hot games later (including 9 hits, 3 doubles a HR, 3BBs and no Ks), McKinney has his season line up to .304/.352/.473. He may yet be a very special hitter and an undervalued part of last season’s big trade.

The last Cub on the list is the Cubs 3rd round pick from the 2014 MLB Draft, Mark Zagunis. Originally drafted as a Catcher, Zagunis is now playing outfield for the Myrtle Beach Pelicans with a walk rate (16.5%) greater than his strikeout rate (13.7%). Eddy mentions that scouts don’t see a lot of power in his bat, but his elite selectivity may pave the way for some improvement in that area. For now, he’s slashing a cool .320/.442/.481 in High-A.

The interesting take away from this list is the presence of the NL Central. Out of the ten prospects listed, from all the prospects in baseball, seven (!) are from NL Central teams – Cubs (3), Pirates (2), Reds (1), Cardinals (1). I’m not sure if that is a dedicated strategy, a calculated response or just an odd coincidence, but it is an interesting development. Make sure to give the article a read, because there’s plenty of good information in there – including a “Top Ten Improved Batting Eyes” list that features another Cubs top prospect.