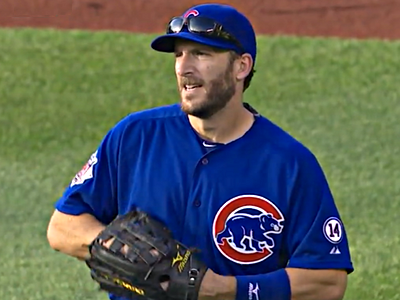 The Cubs won again last night, walking off against the Dodgers in the 10th inning for their fourth in a row:

Walk off sacrifice flies aren’t the sexiest of walk-offs, but it’s not easy to do what Denorfia did. Although a pre-season injury shortened his year, so far, Jansen is striking out 51.0% – that’s not a typo – of the batters he faces. When the ball goes into play, Jansen is more of a fly ball pitcher, but the vast majority of his fly balls this year (36.4 percentage points of the 55.0% fly ball rate) have been infield pop ups. Do a little math, and Denorfia had a mere 14ish percent chance of hitting a line drive or an outfield fly ball. Well done.

The best part, of course, was the celebration, though. I spotted the obligatory Jonathan Herrera bubble gum bucket hat, and I saw Miguel Montero desperately trying to get into the fray – though I’m not sure if he was able to execute the butt kick, because Denorfia was literally being carried away, sideways, by Anthony Rizzo and Starlin Castro.

(Total aside: I respect that Joc Pederson tracked that ball, made the catch, and threw the ball in. Most players just let that ball go, knowing that if they do catch it, they’ll never be able to throw out the tagging runner at third. However, you just never know what might happen. That runner at third could leave the base too early, and maybe you win an appeal. That runner could fall down, and maybe you actually do catch him at the plate. There’s absolutely no cost to catching the ball, so why not catch it and see what happens?)