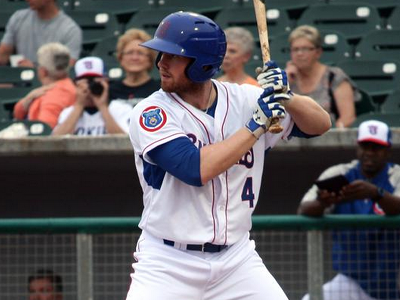 The trade that keeps on giving. I suppose that’s something to keep in mind as the Chicago Cubs head into July as potential buyers.

Addison Russell has come in for recent love, and, while he was the centerpiece of last year’s big Cubs trade at this time, the “other” prospect the Cubs received in the deal has been getting a lot of deserved attention this week.

That prospect is outfielder Billy McKinney, who’s done nothing but rake this year as he climbed to AA as a 20-year-old outfielder, one of the youngest players in the Southern League. His performance of late earned him a spot at the very top of this week’s Prospect Hot Sheet at Baseball America (Mark Zagunis also makes an appearance).

Having gone through a recent stretch where he recorded 12 hits in 16 at bats, McKinney’s AA line is up to .319/.364/.483 with 10 walks and 16 strikeouts over 35 games. Would you like to see more power and/or speed from a guy who profiles in a corner outfield spot? Sure. But what’s become increasingly clear about McKinney is that he can just flat-out hit.

Not turning 21 until late August, McKinney figures to finish the 2015 season at AA, and hopefully he’ll keep doing his thing at the plate. From there, it’s not out of the question that he could start the 2016 season at AAA Iowa – after a visit to big league Spring Training – and factor into the Cubs’ outfield depth picture by midseason. As much as the Cubs have struggled to find replacements in the outfield following injuries this year, it would be nice to have a wave of high upside guys in the upper minors to give a shot and plug in at times in 2016/17 when those same kinds of injuries pop up. And then, after that, maybe McKinney wins himself a full-time job.