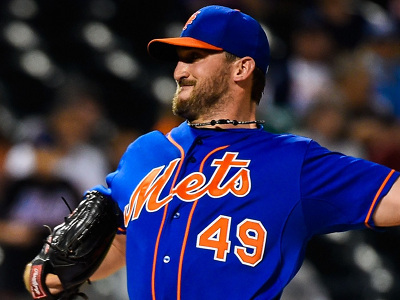 There was a time not so long ago when the overflowing depth in the New York Mets’ rotation was in theoretical competition with the Chicago Cubs’ back-end rotation depth on the trade market. That was the offseason, and the only arm the Cubs managed to move was Felix Doubront … and that, via a release. The Mets moved no one.

Fast-forward to today, and the Mets are still overflowing with starters – so many that they recently moved to a six-man rotation – and the Cubs are in need of back-end options. The ravages of injury, even at the periphery of the roster, are a cruel thing.

We know that the Cubs and Mets have had trade discussions in the recent past, though the focus has always been rumored to be the Mets’ young pitching and the Cubs’ young positional talent. According to Ken Rosenthal, though, they’ve also discussed the possible back-end fit.

Rosenthal reports that the Cubs have discussed lefty Jon Niese, whom the Mets would presumably prefer to be the one of six current starters they unload, given his $7 million salary this year, and $9 million salary next year (with team options thereafter). The Cubs, Rosenthal suggests, would prefer someone “better,” however. And he goes on to say that Niese probably nets the Mets a quality shortstop (from the Cubs or otherwise) only if he’s part of a larger deal.

To be sure, Niese would probably be a fifth starter upgrade for the Cubs (or at least markedly improve their 5, 6, 7 range), but he’s not much of a needle-mover (unless the Cubs see something they know they can fix/improve-upon in his mechanics or pitch mix). Then again, Niese was quietly very good in 2013 and 2014 (ERAs, FIPs, and xFIPs all in the 3.50 to 3.80 range, 4.3 WAR combined over 330.2 innings), and arguably even better the two years before that.

It’s hard to see the Cubs, at this point, taking on that much salary commitment for a depth arm. Is Niese more than that? He’s been better than that in the recent past, but as he approaches 30 (Niese turns 29 in October), it’s possible he has peaked and what he’s shown in 2015 is what he is.

Gordon Wittenymer also mentioned Niese, specifically, in a rumor piece this weekend, so it seems very possible that he has indeed been discussed.

Unless the Mets are looking to eat some salary (rarely their bag), or unless the Cubs are willing to devote a fair chunk of money to a back-end arm for a minimal prospect return, I’m not sure I see this as the move the Cubs make (at least not for Niese, alone*). The tricky part for the Cubs, of course, is that, while a better option may present itself after the All-Star break, Niese is very clearly available now. And the Cubs could use him now.

You can expect this to be a topic of conversation this week, as the Cubs head to New York after St. Louis, and are currently scheduled to face Niese on Tuesday.

UPDATE: I wonder if there’s a lot going on behind the scenes with the Mets and Niese, because Rosenthal just updated himself:

Sources: #Dodgers interested in #Mets' Niese. Reported yesterday in this video that #Cubs had discussed him. http://t.co/JFqc14US12

The Dodgers have been getting by on the strength of Mike Bolsinger and Carlos Frias at the back of their rotation, and dominance from Brett Anderson in the middle. Given Anderson’s non-existent recent health track record, and the possibility that Bolsinger and Frias could regress at any moment, the Dodgers probably need an arm like Niese as much as any team in baseball. And they sure have the money to make adding him like buying a pack of gum.