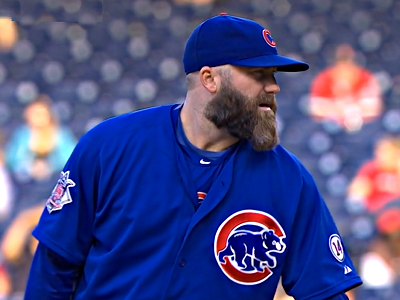 You may have noticed that, although the Chicago Cubs are explicitly going without a set closer right now, mixing and matching their best arms available depending on situation, there’s one guy who seems to be getting the bulk of “closer”-type opportunities.

In his last 11 appearances, Jason Motte has pitched the last inning for the Cubs seven times. He hasn’t pitched any earlier than the 8th inning during that stretch, he’s saved three games, and he’s frequently been used as the third arm in the Rondon-Strop-Motte trio.

Well, Joe Maddon isn’t quite saying, noting that he does like Motte’s style and mentality in the 9th, but he’s not anointing him the closer (CSN). Maddon’s preference remains not to have a set closer, in part because he doesn’t want the “closer” feeling put out if he’s not used on a given day for whatever reason.

We’ll see if Maddon keeps going to Motte in the 9th inning or at least as the third arm after Hector Rondon and Pedro Strop, in whatever order. As we’ve seen this year, given all the Cubs’ late and close games, there’s often not much difference, in terms of importance, between the 7th, 8th, and 9th innings. Often, the highest-leverage moments come earlier than the 9th.

Luis recently looked at Jason Motte’s performance this year, and how he’s been getting the job done in ways very different from how he did it in his prime with the Cardinals – namely, fewer strikeouts but more weak contact.

Also notable in this conversation: Motte has incentives in his contract tied to whether he’s the closer for most of the season.