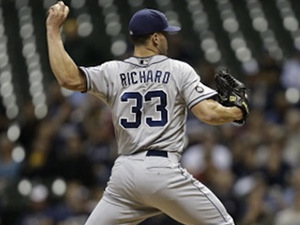 The Cubs made a couple trades yesterday if you weren’t around, sending catcher Rafael Lopez to the Angels for a minor prospect and an IFA slot, and then picking up lefty Clayton Richard from the Pirates for cash.

The Richard deal is obviously the more notable one, primarily because he’s actually starting for the Cubs tonight. It happened very quickly, and hopefully Richard is ready to show that he’s fully back from the shoulder troubles that derailed his 2013 and 2014 seasons. He’s pitched well at AAA this year, especially lately, but it’s not clear he’ll get a second start with the Cubs – if at all – until after the All-Star break. With the off-day on Thursday, the Cubs could elect to skip the fifth spot, and regroup after the break.

Going out of the organization to pick up Richard for a spot start, in place of previous spot-starter Donn Roach, is a clear acknowledgment that the Cubs don’t feel good about any of their internal options (including, for example, the organization’s minor league pitcher of the month for June, Carlos Pimentel, who’s been uneven at AAA this year). The timing of Jacob Turner’s re-injury really stings, as does Eric Jokisch’s injury. The Cubs’ internal options were extremely limited for that fifth spot, and I shudder to think at what would happen if one of the front four went down with an injury any time soon.

Maybe Tsuyoshi Wada is healthy after the All-Star break, and that’s that. Or maybe the Cubs make a deal between now and then to pick up another starter – though how desperate must they look to other teams? Hopefully Richard makes a great start today, at least giving the appearance of another option for the Cubs.

Still, even as we all can see that the offense is a very serious issue for the Cubs right now, this entire conversation is why the rotation needs addressing. The Cubs are one more shoulder cramp or elbow discomfort or slip in the shower away from a full-on rotation crisis.

At least the bullpen seems to be rounding into form, and, with Travis Wood and Edwin Jackson out there, the Cubs could probably survive for a little while by getting one of them back into the rotation if they absolutely had to.