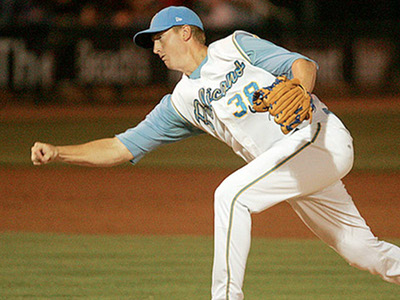 Rowen, 26, is a right-handed relief prospect originally from the Rangers organization. After working his way to MLB in 2014, an obscure rule forced the Rangers to place Rowen on release waivers after the 2014 season. He then signed a minor league contract with the Dodgers on January 20, before being traded to the Baltimore Orioles before the season. In accordance with a clause in his contract, Rowen opted out of that deal at the start of this month, and subsequently signed with the Cubs.

Throughout his minor league career, Rowen has achieved some solid results (1.87 ERA, 3.05 FIP). Over a small stretch at AAA Norfolk this year, the results are similar (2.41 ERA, 2.86 FIP), though his K-rate is down to 16.8% – low, even for him. His submarine delivery, though, isn’t the only unique thing about him.

Rowen throws four main pitches: a change-up, two-seamer, curveball and slider. It’s not the make-up of his arsenal that is unique, though, it’s the velocity by which he commands it. Rowen regularly works in the mid to upper 70s with all four pitches. Yes, you read that right. His fastball maxes out around 80 MPH, but regularly sits in the 78-79 MPH range. Most likely, his unusual delivery and solid control create a bit of effective velocity, together with confusion for opposing hitters. We know he hasn’t struck out many batters in his career, but the combination of his command and delivery do seem to induce weak contact.

Additionally, he is somewhat of a ROOGY – meaning he fairs quite a bit better against right handed hitting opposition. While that is mostly true for a lot of right handed pitchers, it is especially true for Rowen. In 2014, his ERA versus left handers (4.67) was nearly two runs worse than what it was versus righties (2.73).

With his penchant for avoiding the strikeout and the walk, inducing a lot of ground balls and throwing at very low velocity, Rowen’s upside likely tops out around a mid-inning reliever. As we’ve seen, though, that is not entirely useless. Bullpens are constantly ebbing and flowing with success, failure and injury – this year being a prime example – so additional arms are always welcomed. There’s no argument that Rowen is quite a different pitcher than we’re used to seeing, but then again not much about this Cubs season is too traditional. For now, Rowen will hang out at AAA Iowa, and work his way back to MLB, presumably, in case of emergency.

Rowen made his first appearance with the Iowa Cubs yesterday, pitching a perfect inning with a strikeout.