Physicist: Secret to Cubs Success is Science Skip to content 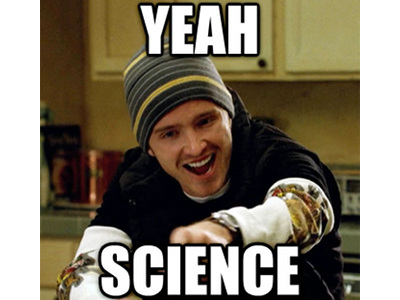 A physicist from Northern Illinois University says science is behind the Cubs’ early season success in 2015.

Assistant Professor of Physics Jahred Adelman explained some of the team’s early season successes in terms of simple physics, and you’re going to want to read it.

Adelman notes Arrieta “is at his best when he induces ground balls and swinging strikes” and does so by mixing his arsenal of pitches.

It so happens that Arrieta’s 49.8 percent groundball rate represents a career best and is tied for  24th highest rate among 95 qualified starters.

As for inducing swinging strikes, no pitch has done that more often this year than Arrieta’s curveball, which has the highest swing-and-miss percentage of all of his pitches at 17.19 percent and has elicited 49 whiffs, per BrooksBaseball.com.

The curve represents the second most likely pitch in his arsenal to get a swing-and-miss behind his slider, which has resulted in 74 whiffs this season (14.15 percent).

Overall, his 25.8 percent strikeout rate is 4.9 percentage points higher than his career average and shows the value of keeping batters off balance.

Adelman explains how a successful curveball compliments Arrieta’s fastball by juxtaposing it against an airplane take off. “They are very, very different things, but in the end they both just come down to the flow of air over an object.”

And how does this pitch becomes a successful one:

“Generally, the amount and direction of the spin determines the amount the ball breaks as a result of friction with the air. The more topspin, the greater the air pressure difference between the top and bottom of the ball, and the greater the break.”

Want to see it all visualized? Check out his recent start against the Mets for one of the best examples of mixing pitches, inducing groundballs, swings-and-misses and keeping batters off balance.

Anthony Rizzo’s ability to maintain success even when choking up exemplifies the kind of balance between swinging hard and controlling the bat which physics would suggest is difficult to grasp.

“If you hit the ball with the sweet spot of the bat, you convert as much kinematic energy from your swing and the bat as possible to the kinetic energy of the ball. If you miss the sweet spot, the bat has some remaining kinetic energy because it is vibrating, so that there is less energy available to the ball. … Other than using a heavier bat or choking up on the bat, what really differentiates the good hitters who have a lot of power is really being able to squarely strike the ball.”

Rizzo, who often chokes up when down in the count, has 33 two-strike hits, which are the second most on the team behind Starlin Castro’s 37. Castro’s 39 two-strike hits are the ninth most among MLB hitters.

Adelman, a Mets fan who earned his Ph.D. from the University of Chicago in 2008, won’t go as far as saying science will lead the 2015 Cubs to the promise land.

“There’s a part of me that wants to say that the Cubs defy all physics, and it all comes down to billy goats, which don’t necessarily adhere to the normal rules of science,” he said. “I’m not sure how true that is, though.”