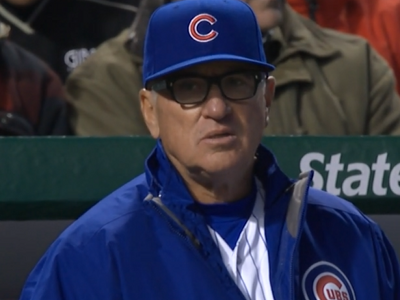 Safe to say Joe Maddon is a player favorite… pic.twitter.com/ADKTg3D6Hs

It should come as no surprise that the first-year Cubs skipper was at the top of an ESPN.com player poll which asked several questions about managers including this one: “If you could play for any manager other than your own, who would it be?”

Maddon rocked the vote to the tune of 35 percent, nearly doubling the voting percentage of three-time World Series champion Bruce Bochy of the San Francisco Giants. Terry Francona, who now famously beat out Maddon for the Red Sox job prior to the 2004 season, checked in at third on the list with 7 percent of the vote.

Tony La Russa, who hasn’t managed since leading the Cardinals to a World Series title in 2011, picked up 4 percent of the vote. His replacement, Mike Matheny, tallied 5 percent.

Maddon was also voted most creative as he garnered 41.2 percent of the vote, which doubled Pirates skipper Clint Hurdle’s 19.3 percent.

Overall, Maddon had a positive showing throughout the poll, finishing in the top five in each of the seven different questions asked. You can check it out in its entirety here.

Among his other top finishes (winner and percentage in parenthesis):

When it came to Best Overall Manager, Maddon finished fourth with 12.5 percent of the vote. To no one’s surprise, Bochy — and his three rings in five years — led the way with 24.2 percent, followed by Showalter (21.5 percent).

The biggest eyebrow-raiser of the poll results might be Maddon’s fourth place finish when asked who best manages a pitching staff with 6.7 percent of the vote. Bochy (again) led the way with 26 percent, while Showalter (again) finished runner-up with 20.9 percent. Bud Black (11.8 percent, 3rd) represents a somewhat surprising inclusion, considering he was fired by the Padres in June after a tepid start to their season.

The poll is just the latest example of the favorable mojo and an increasing positive national perception the Cubs have going in their favor this year.

I won’t go as far to suggest this could help the Cubs when pursuing free agents in the coming years. But having a highly regarded manager in tow won’t hurt their efforts.