Some Execs Reportedly Believe Cubs Will Go After Justin Upton, Plus Other Cubs/Padres Speculation Skip to content 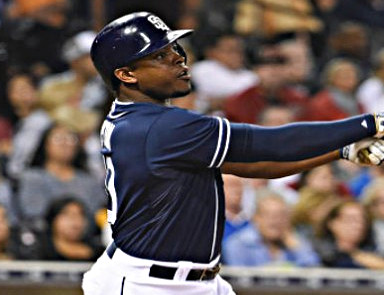 It’s certainly possible that a Chicago Cubs trade this month would shock me, but, by definition, that would be the kind of trade I would describe as “very unlikely” in advance of said shocking trade taking place.

And that’s how I would describe something Joel Sherman says he’s heard from some executives around the game: the Cubs might go after Justin Upton in trade from the Padres. That’s obviously quite interesting, but it seems very unlikely.

To be sure, Upton is a tremendous player who would upgrade almost any offense he joined, and there were rumors connecting the Cubs to him in the offseason before he was dealt to the Padres. The Cubs are – or at least were at that time – on his no-trade list, but that wouldn’t necessarily preclude a trade. Indeed, I’d argue that if Upton has a chance to be traded in-season (thus ensuring he can’t be tied to draft pick compensation, and thus increasing his free agent value slightly), he should jump at it, regardless of the team.

All that said, Upton figures to be among the best bats available on the trade market this month, and will be an extremely pricey rental. The 27-year-old corner outfielder makes $14.5 million this year, his last before free agency, and would cost a significant chunk in prospects.

Moreover, Upton, who exclusively plays the corner outfield spots, is in his worst offensive season in the last three, hitting just .253/.331/.422 (114 wRC+). His power is down substantially, and, before you say that it’s the Petco effect, consider that Petco is no longer the homer desert it once was, and Upton has actually been killing it at home (165 wRC+, versus a meager 71 on the road). Chris Coghlan’s wRC+ is up to 105, by the way. His platoon-mate, Chris Denorfia, is at 99. In other words, it’s not like left field has been a disaster for the Cubs.

Sum it all up and I have a hard time seeing the Cubs giving up a significant prospect package for Upton – at least not more than some other teams, for whom he might be a better fit (and who are battling for a division, rather than a Wild Card spot).

I always leave open the possibility that I’ll be shocked.

More realistic – actually, maybe not – is Sherman’s suggested trade for the Cubs, which he describes as “sensible”: swap Starlin Castro for James Shields. You can read Sherman’s piece for the explanation, though you probably can figure the long and short of it. To me, the deal makes little sense for the Cubs unless they believe Castro’s contract – $6.9 million this year, and about $40 million over the next four years – has negative value. A lot of negative value. Shields will make 50% more over the next three years than Castro will make over the next four.

Since I doubt the Cubs do think there’s huge negative value in Castro’s contract, and since Castro, 25, is a rebound away from his contract looking excellent once again, I don’t see them selling low right now. As I’ve discussed before, taking on Shields’ contract right now is not a very attractive move, even as solid as Shields may continue to be (though he’s 33). And, as I’ve also discussed before, the Cubs’ best bet on Castro right now seems to be simply to hold on and hope for a second half turn-around. He’s done it before.

Ok. So who’s going to be the first to suggest a blow-out Castro-plus-prospect for Upton and Shields deal? There. I did it for you. And I still don’t see it.