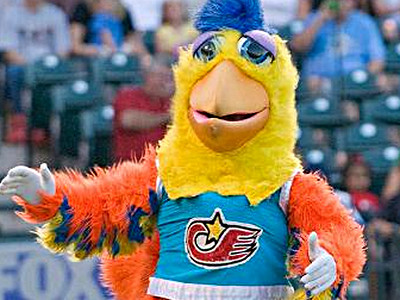 Here’s hoping Clark does not take lessons from Iowa’s Famous Chicken. As a first base coach, the Famous Chicken simply did not work out for the I-Cubs last night.

On the other hand, the Famous Chicken makes a nice scapegoat… can a chicken be a scapegoat?… for a pretty bad bunt attempt by Alcantara and a resulting TOOTBLAN from Szczur:

Fortunately (for the chicken) we have plenty of other games to talk about as well.

Iowa – Despite the fowl-up at first base [Brett: I see what you did there!], Iowa hatched enough runs [And there!] in the eighth to beat the Redbirds 4-1.
Tennessee – The Smokies let this one slip away in the middle innings. They lost 9-2.
Myrtle Beach – Another strong pitching performance turned into another Myrtle Beach win. The final was 1-0.
South Bend – The Cubs converted a big fourth inning into a 10-6 win.
Eugene – Eugene was shutout at home 4-0.
Arizona – The Cubs found just enough offense in this 2-1 win.