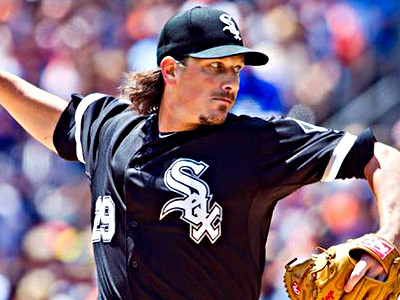 The White Sox might be sellers for the simplest reason of all: they aren’t very good and don’t look to be very good in the upcoming future. Crowned as “Offseason Winners,” the Chicago White Sox haven’t done enough regular season winning to stave off a deadline sale. Like the Padres, their efforts, though genuine, were probably a bit misguided. There are a few stars on the South Side – Chris Sale, Jose Abreu – but even they aren’t enough to keep this team from selling this July.

They can and should be ready to sell right now. Some players may be available, but ultimately held on to, but for the Cubs purposes, there is only one reasonable and/or realistic option. And to get him, we’re gonna need a bigger boat.

I had originally considered including David Robertson and Chris Sale, but ultimately decided to exclude them from the conversation. It’s pretty unlikely that the White Sox will trade Robertson, after just signing him this offseason and Chris Sale is too unrealistic in just about every way. The White Sox may never win with Sale at the helm, but he’s too good, too young and too cost-controlled to trade. Can you imagine what it would take to get him? The only other options – Emilio Bonifacio and JB Shuck – are not very good and/or don’t really fit on this team (Bonifacio has been worth -0.7 WAR and Shuck has a reverse platoon split, for example.)

All of this leaves us with none other than our old aquatic friend, Jeff Samardzija. I think that Samardzija, who is on the final leg of his contract, is actually a good bit more attractive than many of us will care to hear. While his ERA (4.08) is nothing to write home over, his FIP (3.59) and xFIP (3.81) are a bit better. His BABIP in 2015 is a little bit higher than his career average and his LOB% is a little bit lower than his career average.

On top of that, he continues to be a work horse. After throwing over 200 IP the last two seasons, Samardzija has already thrown 132.1 in 2015. He is not giving up a lot of home runs, he has a solid ground ball rate and he rarely walks batters. Essentially, Samardzija is a known quantity – perhaps, especially so for the Chicago Cubs.

Given the intimate familiarity and expiring contract, Shark might actually be someone the front office is especially keen to acquire. He won’t slide into the top of the Cubs rotation, but would be planted firmly in the middle, providing stable outings that don’t burn the bullpen down the stretch. And remember, he had a good deal of success as a starter with the Cubs from 2012-2014. After returning to the Cubs in 2015, Jason Hammel was able to recapture last year’s early season dominance; perhaps Samardzija could as well. This could even be a good chance to get an up close look at one of the potential free agent targets this off season.

More importantly, his mediocre results and expiring contract (coupled with an increasingly crowded market) could depress his trade value enough to make a trade relatively painless. Perhaps a package centered on a Rule-5 eligible prospect who seems destined for an AL team (with a DH spot) could be consummated.