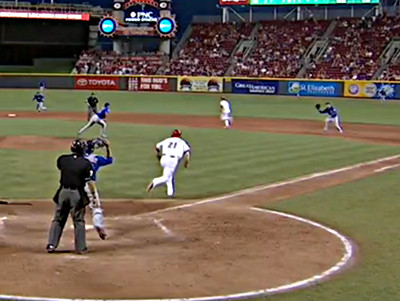 Taylor Teagarden getting the game-winning hit off of Aroldis Chapman, was undoubtedly the surprising highlight of last night’s incredible win. The Cubs offense putting together a Kris-Bryant-pinch-hit-infused five-run third inning was right up there, too.

But it was a defensive play in the 8th inning that made Teagarden’s hit a game-winner, rather than a game-tier or a pure-teaser.

With the bases loaded and just one out, Todd Frazier hit one hard up the middle, as he often does. The ball struck Hector Rondon, and here’s what happened:

That was such a quick adjustment by Anthony Rizzo to get to the ball and then make a quick, strong throw home to get the lead runner. If the ball misses Rondon, is there a chance Addison Russell is right there for a double play? Yes. But it’s also possible that the ball caroms off Rondon in a totally different direction or bleeds through into the outfield, scoring two.

It was a crazy play that went perfectly in the Cubs’ favor. And then they won it from there, despite facing Chapman in the 9th, despite getting a runner thrown out at home in the 9th, and despite earlier trailing by five runs.

I really liked that win.