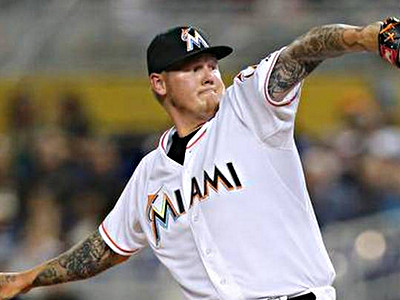 While we are certain that the Cubs have a need for an additional starting pitcher, who they will acquire, specifically, is a lot less obvious. Indeed, there has been smoke regarding several different types of players (ranging from high-end, long term acquisitions to short-term rentals), making it hard to narrow down the list of suspects. Yesterday, a pretty significant Cole Hamels rumor materialized, representing the former; and this morning, a big David Price rumor popped up, representing the latter.

And now there’s yet another notable rumored trade target to discuss: Mat Latos

In a report for MLB.com, Joe Frisaro mentions that the Cubs (along with the Blue Jays) are a potential landing spot for the Marlins’ 27-year-old righty. Formerly of the Padres and Reds, Latos is a moderately attractive [Brett: phrasing], possibly cheap, back-end of the rotation trade candidate. On the year, his traditional results (4-6 4.48 ERA) might scare away the uninitiated, but his peripherals suggest he’s been quite a bit better.

Over fifteen starts (81.2 IP) Latos has a 43.2% ground ball rate, a 21.3% strikeout rate and a 7.2% walk rate – all solid numbers. His 3.32 FIP, then, would sandwich him right between Jordan Zimmerman and Cole Hamels for 34th best in baseball (if he qualified). As a free agent at the end of the year, Latos would be a middle tier rental, which is precisely where we’ve come to expect the Cubs to operate this deadline.

It’s not all great news, though, as Latos hasn’t been the healthiest pitcher over the past year and a half. In 2014, Latos pitched only 102.1 innings for the Reds, after going down with a torn cartilage in his left knee in Spring Training. He did make it back by June 14, but his velocity had taken a hit. When he returned from his injury in 2014, his average fastball velocity (90.7 MPH) was more than two MPH slower than his career average (92.9 MPH). Then, he was shut down on September 7, after suffering a bone bruise on his pitching elbow. Through his 15 starts in 2015, though, his velocity is ticking back up (average 91.3 MPH), which is encouraging. He did miss a little time earlier this year with soreness in that same knee, by the way.

With Latos, there’s another consideration. As many of you may remember from the offseason, there was a pretty big kerfuffle involving comments Latos made about his former team and teammates once he was traded from the Reds to the Marlins. Latos’ former teammates took issue with his comments, to say the least. In short, Latos expressed frustration due to a lack of leadership, dedication and concentration in the Reds’ clubhouse, but several Reds’ players denied Latos’ perspective vehemently. Without knowing the details, it’s hard to lay judgement, but Skip Schumaker reportedly went as far as to say, “I think it was an addition by subtraction …. I think a lot of us will be happy to see him in Miami.” Whatever the case, these are types of distractions no team needs, and it is to be considered.

At the end of the day, Latos is an attractive, potentially-low-cost rental that would very likely help out the Cubs in more ways than one. Just like trading for Jeff Samardzija, the Cubs could use the next few months to evaluate Matt Latos on an intimate level, before he becomes a free agent this winter. They can take their time to monitor his health and see if there is a fit/connection with the coaching framework and team. Latos is young and could be a nice addition, long-term. Trading for him now could be the first step.